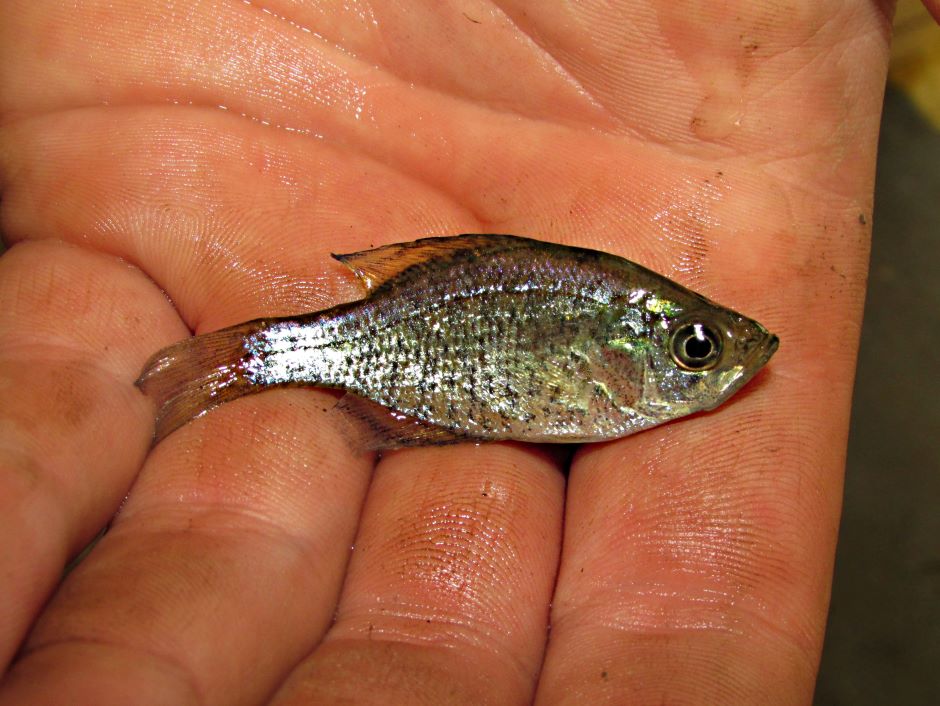 Today we sent about 60 lbs of crappie and 45 lbs of bluegill to Lake Lakota near the Newton Hills State Park. That is roughly 40,000 fish! Here's a picture of one of the crappie before making the trip (Credit: Spencer Neuharth / USFWS, via Flickr CC BY 2.0)

When it comes to fish tracking, tagging, otolith studies and creel surveys may be the first methods to come to mind. However, the options seem to be endless, with new and innovative tracking methods making their way into fishery managers’ radar. In particular, those tasked with the arduous work of tracking down stocked fish.

When resource departments dedicate a lump sum to fisheries to stock fish that are threatened in an ecosystem, or even those that are simply popular catches, they often expect to see some returns. This data is often provided by PIT tags, otolith studies, creel surveys, or other methods that provide data on how often fish are being caught, where they are, if they survived to adulthood and other variables that can influence future stocking efforts.

And certainly, while these methods have been used in the past and have been effective, there is merit in giving newer strategies a chance as well. One of these strategies is through the use of calcein dye to catch and study fish under a black light which can save cost and is safe for the fish. While dyeing fish is not a new strategy per se, its implementation and use have expanded.

In 2016, according to a release from the Arkansas Game and Fish Commission, a student in its aquaculture program dyed crappies using calcein. Dyes (including calcein) have been used to study a variety of fish in the past—one notable example is salmon fry at the U.S. Fish & Wildlife Service Northeast Fishery Center—but the method had never been applied to crappie.

The student that came up with the idea, Greyson Farris, claims that the idea stemmed from wanting to replace the previous standard method. In the first year, crappie were marked with the traditional chemical, U.S. Department of Agriculture-approved oxytetracycline, or OTC, which is absorbed through the fish’s scales into the bony areas, namely the ear bone. The following year, the crappie were still treated with OTC but were also treated with calcein.

Treatment processes are not all that different. In both cases, the fish is submerged in a chemical solution (calcein or OTC) and then released. The main difference is time—the calcein treatment takes just over seven minutes, while the OTC treatment takes over 6 hours. The time saved isn’t the only benefit to using calcein either. When using OTC to mark fish, the only way to confirm the fish was treated is by removing the fish’s ear bone, which requires cutting into the fish. When working with already threatened species, losing even one sample is a risk.

Instead, Farris proposes using calcein to dye the crappie, which would allow for the crappie to be caught, observed through a black light and then released without risking the loss of the sample. While the otolith surveys require cutting the fish open and removing the otolith, which takes about 15 minutes, researchers can tell right away that a fish has been treated with calcein, saving time surveying the samples.

While there are concerns that the calcein will not last in the fish, as it can degrade when exposed to sunlight, crappie tend to stay in deeper waters and keep their bellies downturned, rarely moving onto their sides. Simply, it’s unlikely the calcein-treated fish will be overly exposed. And while calcein treatments, in this case, cost approximately five times as much as the OTC treatments, costing $5,000 to mark 90,000 fish and 1,000 to mark 90,000 fish, respectfully, the value of calcein treatments is in the form of time and fish saved.

When the U.S. Fish & Wildlife Service Northeast Fishery Center (NEFC) treated salmon fry with calcein, the process was actually much cheaper than Farris’ study, meaning there is potential for the cost to be brought down and the process to be made more efficient. Ultimately, the method needs more space in fisheries to conduct further research.

In the end, dyeing crappies with calcein is not a totally new method of surveying stocked fish. Instead, it is simply a rehashing and new application of a known technique, dating all the way back to 1997, according to the NEFC. Ultimately, resource managers should prioritize protecting the fish they spend a considerable amount protecting and stocking; each fish should be valued and protected. Glowing crappie from the study where Calcein was used to dye fish. (Credit: Arkansas Game and Fish Commission)