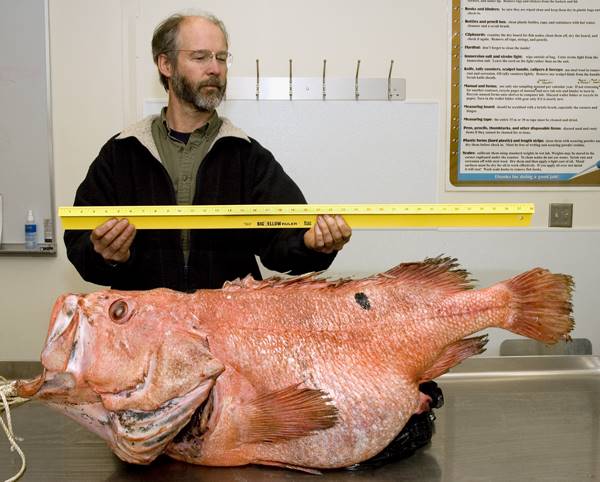 Most anglers prefer to catch the biggest of the bunch when they cast their lines; nothing can replace the feeling of reeling in a hefty lunker. However, keeping those large catches may be harmful to the longevity of whatever waters are being fished, including managed fishery areas. Scientists say that one type of big fish – fertile females – is particularly valuable for fishery health. These fish are often referred to using the oddly apropos term, BOFFFFs, which stands for big, old, fat, fertile female fish. This is how scientists at the University of Hawaii, California State University and the National Oceanic and Atmospheric Administration identify them in a study published in the International Council for the Exploration of the Sea’s Journal of Marine Science.

The researchers brought together hundreds of investigations pointing in one clear direction, says Mark Hixon, professor of marine biology at the University of Hawaii and lead author of the study. “BOFFFFs are valuable for fish population replenishment and stability,” he said.

Compared to smaller and younger fish, these goliaths are much more efficient at various ecological functions and preserving their species. Larger fish tend to produce more eggs, meaning that catching and keeping a BOFFFF limits potential future generations. Fisheries rely on current representations of fish to maintain themselves, and managers are prepared to intervene when needed by stocking and monitoring the area. However, taking a major contributor out of the ecosystem, and even targeting such fish, could harm the future of these habitats.

Not only do BOFFFFs produce more eggs, it appears that they also make higher-quality eggs. These eggs, study authors say, are more likely to hatch young fish that grow and survive better. One of the major concerns in the species management field is recruitment. Species recruitment refers to the transition very small juvenile fish undergo when they become older, larger fish. Having more fish age successfully, reach spawning age and continue the population is one way of ensuring that a species maintains a healthy quantity and can continue to be enjoyed as a resource.

The older fish are also known to lay their eggs in more places, meaning that the species can be found in greater abundance throughout the habitat as well as providing their spawn with more chances of growing up in a suitable environment.

“Increasingly, fisheries managers are realizing that saving some big old fish is essential to ensure that fished populations are stable and sustainable,” said Hixon.

As an example, he points to the Atlantic’s cod fishery, which has been particularly affected by the loss of big, fertile female fish. In 2010, managers implemented control measures, including catch limits, to help the cod fishery there recover.

The loss was likely a result of anglers targeting bigger fish which led to more BOFFFFs being removed from the fishery. The study notes that removing these fish impacts the size and age structure of fish populations. Authors write, “Age truncation is now known to destabilize fished populations, increasing their susceptibility to collapse.”

Even after recognizing the importance of BOFFFFs, the next question must ask: What can be done to protect them or repair the loss of these valuable fish? While the answer may not be preferred, the unfortunate reality is that protecting fishery resources requires long-term adjustments to behaviors–there is no simple solution. Hixon believes that there is still hope, but it will require the participation of all who utilize the fishery—he states, “Only if fishing is cut way back, which has obvious economic consequences,”