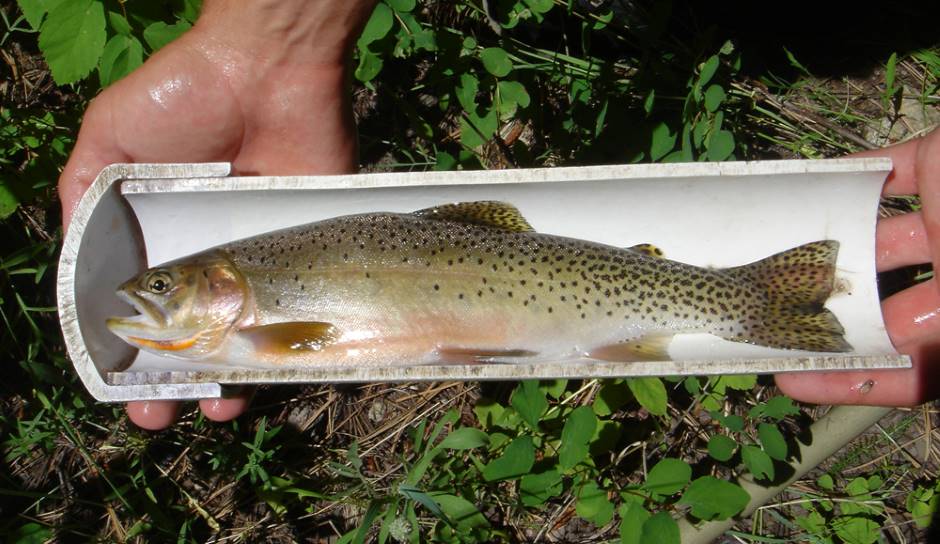 There’s big trouble with brook trout in Big Sky Country. These invasive fish have spread through waterways in Montana and the rest of the West, disrupting ecosystems and crowding out native species. While the old vanguard of wildlife management might recommend a piscicide to eradicate gill-breathers in the area indiscriminately, a new study shows that electrofishing can do the job without harming the more desirable inhabitants of a stream.

Early tests in the West seemed to show that electrofishing was only a temporary solution, said Brad Shepard, a senior aquatic scientist with the Wildlife Conservation Society who participated in the study. Ongoing electroshocking could suppress target species, but it only took a few years for the species to bounce back once these removal efforts stopped. When he started the project as an employee of Montana Fish, Wildlife and Parks, his efforts produced similar results. Not easily defeated, FWP tried a couple of new tactics as outlined in the study in Fisheries Management.

Results and Applications Beyond Brook Trout

The long-term study revealed plenty to the researchers. Firstly, electrofishing is a very viable method of eliminating undesirable fish populations in small streams no deeper than four feet — when performed multiple times per year. By first targeting adults and then juveniles, the scientists found that they could keep the fish from coming back. And as long as the treated area isn’t too big, electrofishing can be less expensive than piscicides.

“I think this has some application at a broader scale,” Shepard said. “Anywhere you have systems with natives and non-natives, and you want to selectively eradicate the non-natives with the physical conditions I mentioned, this would work.” Brook Trout that were removed in one area of White’s Creek (Credit: Ron Spoon/Montana FWP)

How Brook Trout Made it to the West

The brook trout problem in Montana is tied to the history of American expansion, Shepard said. As settlers moved westward, the federal government began stocking non-native brook trout as a food source in western streams and ponds — often by releasing them from train cars. This unceremonious stocking method was also decidedly unscientific, with little done in the way of population surveying or forethought to possible environmental repercussions.

Between 1920 and 1950, millions of additional brook trout were stocked in the West. Over the next 50 years, biologists repeatedly observed brook trout overtaking native species in many western states. The cutthroat trout suffered in particular, possibly due to their young hatching later in the year than brook trout.

“The observational information suggests that brook trout are doing better than cutthroat just because they’re surviving the winter and emerging at better rates than they did when it was colder and harsher,” Shepard said. “And brook trout get a head start on resources since they’re born earlier.”

The work to level the playing field started in 1993 with one test stream and just a few crews of volunteers but would soon come to include six streams. Teams would tackle 200 to 300-meter segments, performing multiple electrofishing passes until a few trout were caught. They’d stash the fish in buckets so a different crew could measure and weigh all fish before returning the cutthroat trout to the stream and removing the brook trout. This information was used to estimate the total number of fish in each area. Sometimes the researchers offered the larger brook trout to local food banks. The rest were marked and placed below the constructed fish barriers.

In the early days, the crews would electrofish a stream once a year. But as time went on, the researchers found multiple treatments a year were more effective. While it took researchers around eight years to eradicate brook trout in the first stream using annual treatments, electrofishing in the other streams killed off the invasive fish in just a couple of years.

Shepard said the days were long, with work often taking 12 hours each day during the summer. And the streams didn’t always cooperate. He recalled one stream in particular: Craver Creek, a silt-ridden waterway that was covered in thick brush. But Shepard and his crew weren’t to be dissuaded so quickly.

“It took four of us eight hours to clear 150 meters — it was that nasty,” he laughed. “We were literally crawling on our hands and knees trying to shock [the brook trout]. It took us about a week to do three or four hundred meters.”

“After doing that a couple times, I made an executive decision that it was just too dangerous,” Shepard said. “We gave it our best shot, but we ended up bailing on it.”

The Wildlife Conservation Society conducted the study with the Wild Fish Habitat Initiative, the U.S. Forest Service, the U.S. Bureau of Land Management, Trout Unlimited, and the Western Division of the American Fisheries Society.