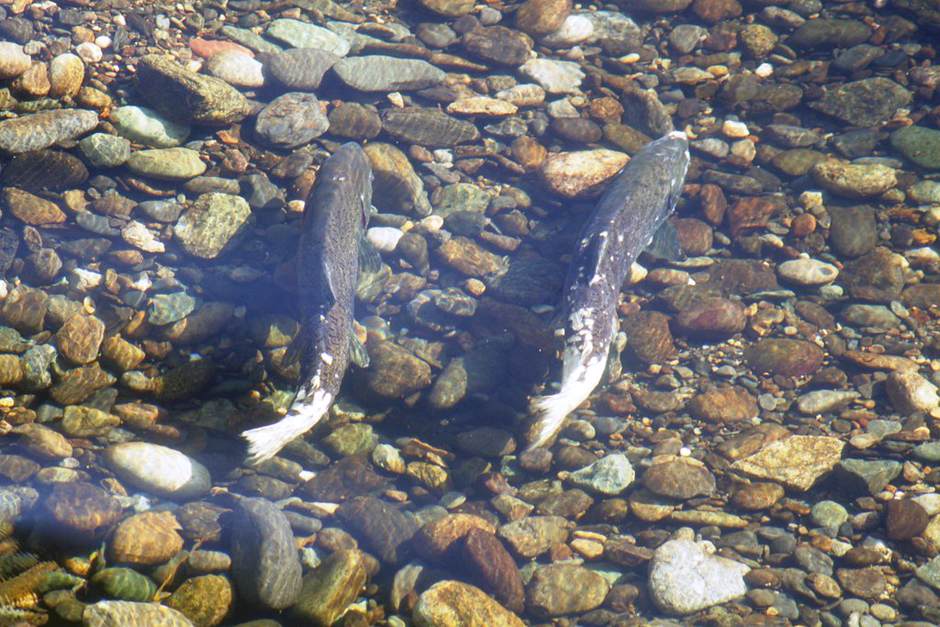 Alaska’s waterways are warming and the Alaskan salmon population is dwindling. Five years of temperature data from 48 streams throughout the Cook Inlet reveal a warming trend that places plenty of stress on salmon and other cold-water fish in the state, the Homer Tribune reported.

Stream ecologist Sue Mauger came to Alaska in the early 2000s expecting to find streams full of frigid water — instead, her measurements revealed water temperatures in the high 50s. Juvenile salmon experience stress around 55 degrees, while adults are impacted by waters 59 degrees and above.

Although the warmer temperatures aren’t directly killing adult salmon off, they limit the survivability of eggs and fry. Warming stream waters may also prompt salmon to migrate out to sea early, where their underdeveloped bodies may have trouble dealing with the ocean’s salinity.

Rising air temperatures are causing many of Alaska’s waterways to warm, but not all streams are affected equally. Snowmelt-fed channels at higher elevations are the least vulnerable to changing air temperatures, and Mauger suggests that these will offer valuable refuge for salmon in the future.

While many streams in Alaska are facing temperature-induced challenges, Mauger says the Kenai Peninsula is doing pretty well overall. Human efforts, including wetland preservation, mindful bridge design and limiting waterway development, can slow the rate of change and help preserve habitat for salmon.

Unfortunately, in 2022, life for Alaskan salmon has taken a turn for the worse, reported the Associated Press. Salmon populations in Alaska have drastically dropped in specific waterways as streams become warmer and warmer. The species decrease is not only felt by those living in Alaska’s cities as access to the fish becomes less certain, but indigenous groups have also suffered losses. Tribes located along the Yukon have historically relied on salmon for food through the winter. Unfortunately, in 2021, many were unable to secure needed captures, creating food insecurities within the tribe.

State representatives organized for emergency aid to be sent to villages in response to the missing salmon. The state has also taken on initiatives that aid salmon fisheries as a means to restore the state’s waterways. Since salmon spend part of their life in the ocean, it is hard to tell why the Yukon and other Alaskan waterbodies are suffering a loss of the state fish. However, most researchers agree that climate change is the culprit. As waterways become warmer, stressed salmon either become diseased or migrate too early and do not survive.

Tribes have requested that fish-tracking sonar be used in the river to better understand the rapidly decreasing population. The state has created several initiatives to restore populations in their natural habitat. Alaska’s Department of Fish and Game released a document in 2019 outlying salmon’s state history and the state’s plans to help.

Alaska has four state laws that work to protect spawn sites and many other laws focusing on protecting clean water. The state has strict regulations on hazardous materials and pollution, with enforcement becoming more stringent as the salmon population suffers. The state also uses hatcheries as a resource to replenish salmon populations in streams.

While state action has undoubtedly helped, community organizing has also been deeply impactful in restoring waterways to be more hospitable. Unfortunately, warming waters are out of the individual’s control and may continue to impact the salmon population in the future. Alaska has remained firm in its defense of the fish as both an important cultural tradition and a vital part of the state’s economy.