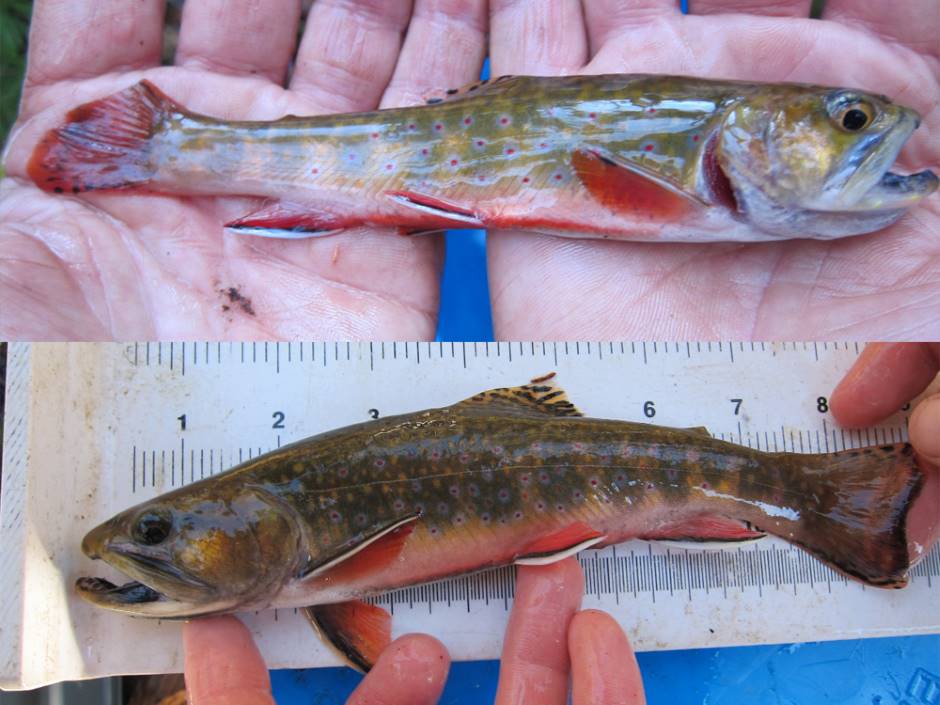 The official fish of eight states, including West Virginia, the brook trout has been an angler’s favorite since colonial times. But as acidic precipitation and a warming climate alter the brook trout’s Appalachian habitat, scientists are struggling to determine what combination of environmental attributes make the ideal home for this cold-water fish.

Researchers from West Virginia University and the state’s Department of Natural Resources studied brook trout and their habitats to understand the complex relationship between food availability, water temperature and competition in three distinct types of waterways. Their findings were published in the April edition of Hydrobologia.

“One of the things that’s pretty unique about the study area is we know that brook trout are residing in and using much larger streams and rivers here than in a lot of areas in the Appalachians,” said Todd Petty, a professor at West Virginia University. “We’re intrigued by their use of these larger water bodies.”

Brook trout generally prefer smaller, cooler creeks to wide and warm rivers. But in Shavers Fork, brook trout have made their homes in a variety of waters, although each environment seems to influence the fishes’ growth in different ways. Petty said that this region might still reflect the wider distribution that brook trout exhibited before the threat of acid rain and other environmental hazards.

“Shavers Fork is a model system for perhaps what used to be in other areas,” Petty said. “It gives us a sense for what’s constraining brook trout productivity.”

The researchers employed electrofishing to capture all the trout they encountered — whether brook, brown or rainbow — at six sites representing three types of brook trout habitats: headwaters, large tributaries and mainstem rivers. Each fish was given a UV-activated “tattoo” on their fins, then weighed and measured.

Researchers sampled the diets of a subset of the collected fish by pumping water into their stomachs, forcing them to regurgitate their most recent meals. Although it may sound uncomfortable, Petty said the procedure does not harm the fish, and is preferable to cutting them open to examine their stomach contents. After a brief recovery period, the sampled fish were released at the location of their capture.

Temperature sensors and data loggers at each site took readings on the hour. The researchers expected the trout to be in the warmer, larger rivers to consume more while retaining similar growth rates to their brethren in smaller streams. While the larger habitats afforded greater food availability, warmer temperatures should have increased metabolic costs, essentially requiring more food with fewer results.

“[Brook trout] are squeezed by these competing resources. They need both food and cold water, but those tend to be negatively correlated,” Petty said. “The interesting thing we found is that fish in the larger water bodies, even though it was warmer, grew more,” Petty said. “Their levels of consumption more than offset the warmer temperatures. That leads to the question: then why aren’t more fish out there?”

In the mainstem rivers, the researchers found that brook trout tended to amass near cold water upwellings. These small pools, Petty said, provide enough thermal refuge for the fish that reside there to take advantage of increased prey availability while enjoying the benefits of the cooler temperature. However, space in these pools is limited, so brook trout in mainstem rivers must compete with one another not only for sustenance, but for prime real estate as well.

Petty said that previous restoration efforts have been handled on a stream-by-stream basis. But he proposes that improving interstream connectivity through mainstem management may be more efficient. A 2-year-old project in Shavers Fork created additional pools in the mainstem, but it’s not clear they’re helping.

“These deeper pools actually intercept the water table if constructed properly, and right now we’re not sure they’re working,” Petty said. “Brook trout like them, but we need more temperature data.”

The project is part of a mainstem initiative in Shavers Fork that seeks to reduce, if not reverse, the decline of brook trout in the region. Future efforts will continue to monitor temperatures in the pools and their use by brook trout.

“We really feel that these mainstem rivers were historically very important and will play a larger role in getting brook trout populations to extend,” Petty said. “We’re trying to stem the tide, so to speak.”