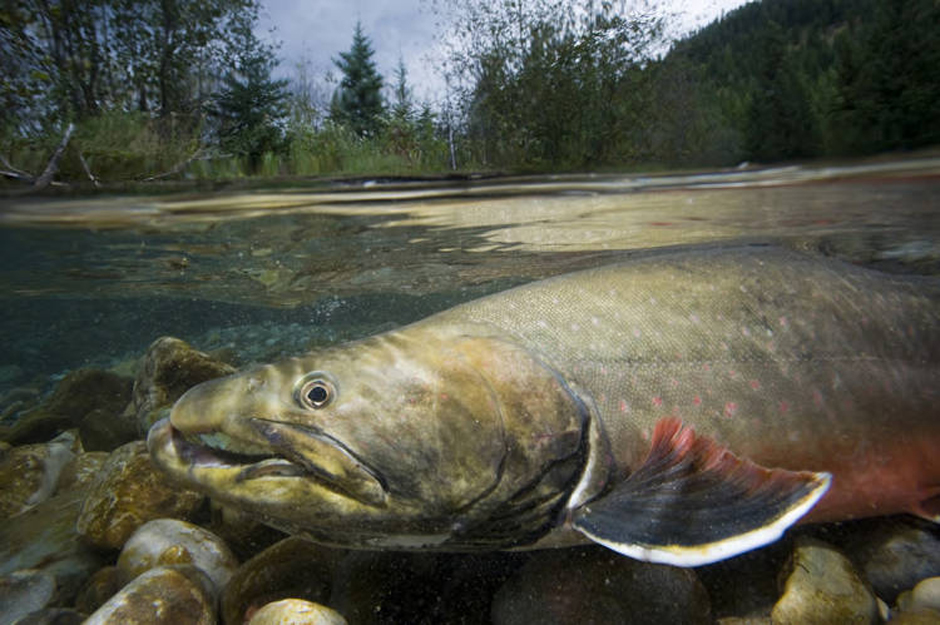 Bull trout lurking near the outflow of British Columbia’s Chilko Lake had biologists there wondering if the predators were taking a bite out of the lake’s annual migration of millions of sockeye salmon smolts. After flushing nearly 70 barely digested smolts from one 25-inch bull trout’s stomach, they had their answer.

“It definitely surprised us when we’re pumping these stomachs of bull trout and smolt after smolt after smolt comes out,” said Nathan Furey, a doctoral candidate at the University of British Columbia and the lead author of a recently published study in the Journal of Fish Biology on the bull trout-sockeye predation. Many of the bull trout examined in the study had so gorged themselves on smolts that they had gone beyond what scientists would expect them to sustainably consume on a daily basis.

“You wouldn’t expect a bull trout to be able to feed that rapidly over the long term,” Furey said. “It’s digestive machinery wouldn’t be able to keep up.”

This look into the bull trout’s opportunistic binge feeding came about as part of the UBC Pacific Salmon Ecology and Conservation Laboratory‘s ongoing research on the Chilko Lake sockeye population. Around 20 to 40 million sockeye smolts migrate from the lake each year, and 1 to 2 million adults return to spawn, making it one of the largest of the hundreds of populations of the species in the Fraser River system. It’s one of a few indicator stocks whose numbers the Canadian government regularly estimates to keep tabs on this culturally iconic and commercially significant species.

“By seeing how the Chilko Lake population is doing, they have a better idea of how the Fraser River sockeye are doing as a whole,” Furey said.

The salmon lab’s work includes capturing migrating smolts and tagging them with acoustic transmitters to track their progress and movement patterns along their 370-mile journey from the lake through the Strait of Georgia. Furey said telemetry data have also suggested that smolt survival is “quite poor” in the Chilko River, which flows from the lake. That, combined with the bull trout hanging out near the lake’s exit during the smolt migration, led the scientists to wonder how heavily the trout were feeding on the salmon.

To get an answer, lab and local First Nation members took to fly fishing or baitcasting for bull trout during the migration, capturing 22 trout. Furey inserted latex tubing into their mouths and pumped in water to flush their stomachs, bottling up whatever came out to identify and count later. The trout were released unharmed.

Between the poor smolt survival data and a few bull trout documented having stomachs bursting with smolts, the researchers are starting to build a story about the effects of predation on the Chilko Lake sockeye population. But the implication of an individual bull trout’s ability to eat a great many smolts won’t be clear until scientists can get better handle on the size of the bull trout population there, which Furey said is a “complete unknown.”

Even if the effects on salmon aren’t yet clear, the research is valuable for the new information on bull trout itself, which is listed as a species of “Special Concern” by the Committee on the Status of Endangered Wildlife in Canada.

“The big implications are that bull trout can eat a lot of smolts and that the smolt migration is really important to bull trout from a predator perspective,” Furey said. “A lot of times, we focus on the salmon perspective, but the role that these salmon smolts play for bull trout ecology might be quite important.”