Buffalo Reef is considered a reef in much of the same ways that coral reefs are—the areas symbolize a thriving ecosystem comprised of diverse aquatic organisms. However, instead of coral, the reefs of Lake Superior are composed of cobble and invasive debris from copper mining that occurred decades ago in the Keweenaw region, according to Michigan’s Department of Natural Resources.

Native groups remember the Keweenaw peninsula when it was crowned with copper deposits, the only place in the world where copper could be mined at the surface. Indigenous groups traded the copper up and down the Mississippi, recalls Evelyn Ravindran, the Natural Resources Director of the Keweenaw Bay Indian Community, in an interview with the Great Lakes Indian Fish & Wildlife Commission.

The GLIFWC reports that in 1842, the Lake Superior Ojibwe surrendered millions of acres of land to the Federal Government, allowing the mountain to become a designated copper surface mine. With the surrender, a treaty was signed. This treaty became known as the Copper Treaty and reserved Ojibwe rights to hunt, fish, and gather in the designated territory forever.

There was a copper land rush in 1842 that led many people from the west to settle along the peninsula in hopes of finding copper. The MDNR approximates around 140 mines were set up during this mining boom. Miners quickly discovered they could get more copper by pounding the basalt and then filtering the debris from the copper.

The debris became known as stamp sands due to the fashion in which it was created. And the damage caused by these mines is still felt today in the form of these invasive stamp sands. Up until the 1930s, the mines dumped the stamp sand debris in Lake Superior—approximately 22.7 million metric tons of stamp sands were expelled, says Biological Sciences Professor, Charles Kerfoot, in an interview with GLIFWC.

The strong currents of Superior allowed stamp sands to be carried all the way down the Traverse River and invade the Michigan shoreline, reports the MDNR. As time went on, the small black particles continued to multiply on the coastline, pushing vegetation further back from the coast.

Unfortunately, the stamp sands have impacted fish mortality statistics as common spawn sites are no longer hospitable for eggs or fry. The crevices between cobble that would have been a common egg site have been invaded with these particulates, making laying eggs there impossible.

Even if a fish managed to lay their eggs safely, the fry would have to find food in the nearby area quickly—a difficult task considering aquatic organism populations have been dwindling since the early 1930s.

Protecting the reef as a spawning site for whitefish and lake trout makes it a more than local concern. Buffalo Reef makes up a majority of lake trout and whitefish spawn sites, and the species is sure to suffer losses if the reef is not restored. 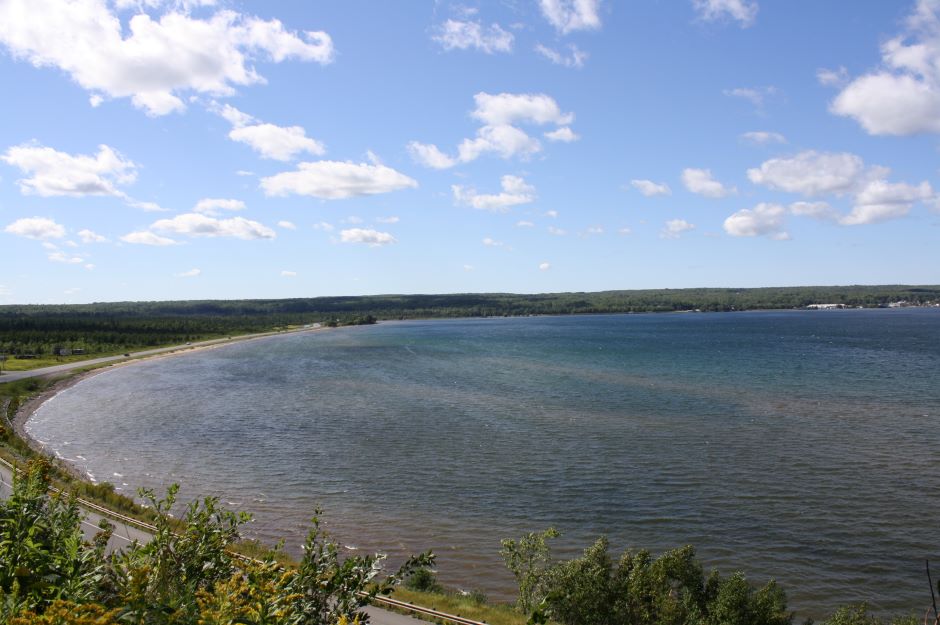 The base of the Keweenaw Bay from U.S. Route 41 (Credit: Royalbroil, via Wikimedia Commons, CC BY-SA 3.0)

Cleaning up the Keweenaw Peninsula

According to the MDNR, the first phase is dredging. While dredging is often viewed negatively due to the harm it can cause when used as a practice in overfishing, dredging has also been able to restore environmental hazmat zones.

Onondaga Lake in New York is an excellent example of a lake suffering from a build-up of toxic sediment at the bottom of the lake and benefited from dredging. Dredging ships were able to remove the toxic sediment by upheaving the entire lake bottom. The lake was able to begin to recover once the toxic sediment was removed.

Communities throughout the Keweenaw region are fishing people. Whether it be for sport or food, most people living along the peninsula know someone who fishes and will bring home catches. Protecting the reef is a large part of preserving the identity of the region. The response must come from all members of the peninsula to create a unified voice in defense of the Buffalo Reef ecosystem.