How a California Watershed Sustains Salmon 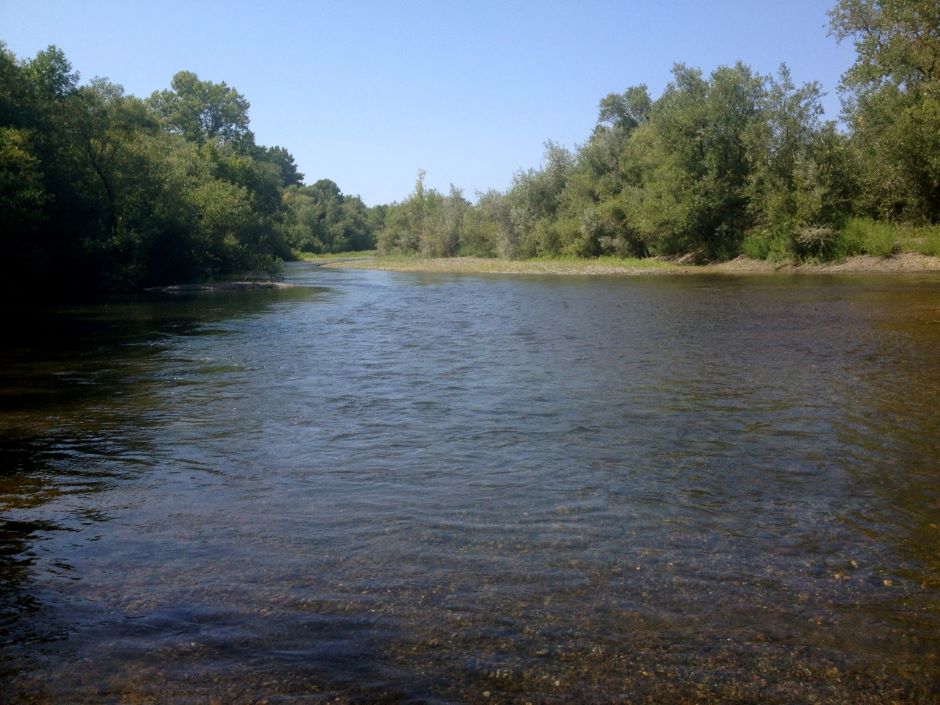 The Russian River near Healdsburg, California (Credit: Brian. via Flickr CC BY 2.0)

During the second half of the 20th century, the Russian River’s annual run of coho salmon plummeted from more than 10,000 fish to fewer than 10. Recovery efforts in the northern California watershed have boosted recent runs to more than 100 spawners, but many offspring they produce spend the summer locked up in stagnant, disconnected pools that form when the creeks dry up seasonally.

That’s often a death sentence, according to Cleo Woelfle-Erskine, one of the researchers in a 2017 study, who is dedicated to researching so-called “intermittent” creeks in a watershed adjacent to the Russian River. He and his research group are tracking water quality and counting young coho and Chinook salmon, and steelhead trout in these isolated pools to help understand where all of the missing fish seemed to go. Unfortunately, the team has seen groups of fish wiped out by degraded water quality.

“We have found some pools where there were fish in July and there were no fish in October,” Woelfle-Erskine said. “We’re pretty sure that dissolved oxygen was the cause.”

But that isn’t always the case. They’ve also found sanctuary pools dense with young coho and steelhead throughout the dry season that appear to get a continuous dose of oxygenated water from groundwater seeps and springs along the bed or bank.

Though they’re working in a small sub-watershed, their research on what allows one pool to sustain fish while another suffocates them could be useful throughout watersheds in Northern California, which is a major hub of salmon recovery with plenty of intermittent streams. Netting fish in one of the study pools (Credit: Cleo Woelfle-Erskine)

Interest in the results could expand beyond northern California if climate change dries up streams farther north. The risks and concerns of that very disaster are becoming more and more common as California enters its 3rd year of drought. The ongoing drought introduces a plethora of problems for local fish. Droughts often lead to increased water temperature and anoxic conditions, not to mention streams drying up and trapping fish in reservoirs.

Warmer water temperatures can be particularly harmful to salmon as the species is very sensitive to heat stress which can even lead to death. Additionally, salmon rely on temperature variances to indicate the start of their migration season, so juvenile salmon may migrate early and face risks of disease and predation in the harsher marine environment. When too many juvenile salmon are lost, it spells bad news for the fishery they are meant to return to, as that means lower species recruitment and fewer adult salmon capable of spawning.

“Streams in Oregon and Washington, where most of the salmon research has been done, typically flow year-round,” Woelfle-Erskine said. “As the dry season becomes more intense and rainfall more erratic, we’d expect to see this pattern propagating northward.”

Their work so far has shown that sometimes a pool doesn’t sustain over-summering salmon even though it appears to hold cool water and enough cover to protect young fish from predators like raccoons or wading birds. Woelfle-Erskine said that seems to be a result of crashes in oxygen levels. These crashes are only exacerbated by climate change as higher temperature waters lead fish to consume more dissolved oxygen.

“We found that in these intermittent pools that they could go down to essentially no dissolved oxygen fairly early in the season,” he said.

While there is a great deal of literature examining how biological and physical processes in the pools combine to affect oxygen levels, there are still gaps in understanding the intricacies of each unique system. These gaps include pool inputs from both groundwater seeps and the water that continues to flow beneath the gravel stream bed but doesn’t see the surface. Overall, recognizing something is wrong is the first step in determining a solution, so while there is still information missing, fishery managers may know better what to monitor in their areas of responsibility.