In Disasters, Researchers Hope Robotic Fish Can Come To The Rescue 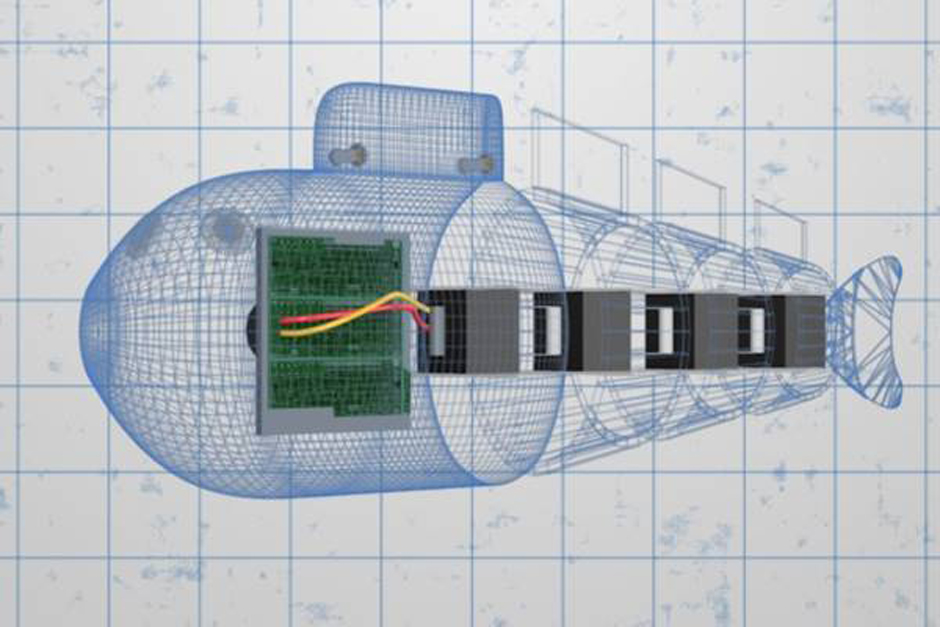 A schematic detailing the placement of chips and other devices within the robotic fish. (Credit: William Davis / Georgia State University)

Though the concept of a robotic fish is not new, there are always new ways to apply the idea. So while researchers have already made robotic fish for things like water quality monitoring or to develop better propulsion systems for submarines, others at Georgia State University and New York University are tackling a different issue: protecting fish after large-scale disasters, like oil spills.

Their work is combining a custom-built robot fish, algorithms and mimicked fish movements. If they can perfect how their robot swims, and thereby convince fish to follow it, the researchers hope their robofish can one day lead schools of its living counterparts away from disasters to safer waters.

“You see animals suffering from the (Deepwater Horizon) oil spill, and that is our inspiration, trying to save their lives,” said Igor Belykh, an associate professor of applied mathematics at Georgia State University, in a statement. “Technology has come so far, and maybe we could have done more to help them. I’d like to see if robots could make a difference and stop something like this from happening again.”

Belykh’s end of the work deals with the programming side of making the robot move and glide through water like actual fish. So he has come at it by considering questions related to synchronizing movements with schools, like complicated shifts and turns as well as keeping a safe distance from other swimmers, just like actual fish do.

“It’s a very deep mathematical problem,” said Belykh, in the release. “Each robot needs to extend some information about each other’s location, velocity and tail frequency.” This information ups the trust that fish swimming around the robot place in its leadership, but it can’t be communicated too often, both for keeping real fish convinced and for conserving battery life, says Belykh. His partner in the work is Maurizio Porfiri, a professor of mechanical engineering at NYU.

Porfiri is dealing with the testing and development side of making the robot fish perform realistically. He says that he has always been fascinated by animal behaviors and has spent years studying the intricacies of fish movement to improve the robotic fish model.

Some of Porfiri’s past work on the robofish include testing the responses that actual fish have when it’s swimming nearby. This involves separating the fish into three different tanks, side by side. Real fish go in the middle tank, while one tank is left empty and the other holds the robotic fish. Porfiri judges how the real fish relate to the fake one and assesses why and how they react to its movements and visual profile.

The robotic fish’s appearance is one of the most important factors for real fish when determining if they’ll follow its lead. For example, Porfiri has found that the robot can’t be too long or too short and that real fish just aren’t drawn to the color gray. Most importantly, however, is the tail. If the robot fish’s tail isn’t moving, then real fish stay away. Likewise, actual fish get spooked if the tail makes any sort of unnatural noises.

More generally, the researchers say that they can use different colors and striping patterns to attract the kinds of fish they want to entice into following the robofish.

“The biological problem is to find the right size, color and frequency of the tail to make real fish believe this guy can be a leader and decide to follow it,” said Belykh, in the statement.

“The main thing is we’re trying to get the same type of flow between the robots and the animals,” Porfiri added, in the release.

In their current version, the robots are programmable models with chips, batteries and motors. They have Wi-Fi compatibility and are controlled by a tablet computer. Belykh is working to incorporate his mathematical models into the chips and computer programs to guide fish school movements. From there, Porfiri plans to look deeper into the behavioral dynamics of fish and how they swim in schools.