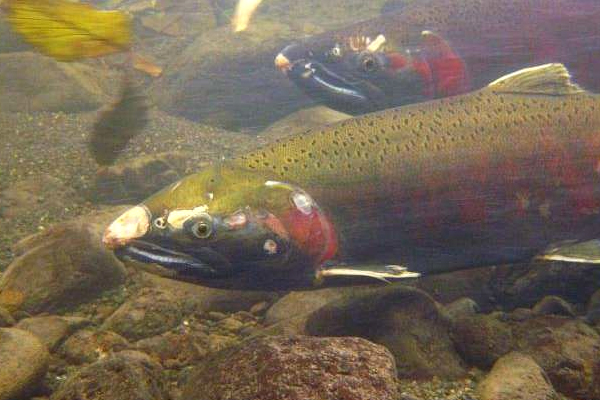 Studies of intensively monitored watersheds such as the Elwha River in Washington are measuring the benefits of restoration for native salmon and steelhead. (Credit: John R. McMillan / NOAA Fisheries)

Since the 1990s, billions of dollars have been invested in works across the United States to improve stream health for fish. But many of the projects, through a lack of monitoring or recording of basic details, have provided little information for other researchers looking to learn from their approaches.

The Pacific Northwest is home to many such streams, where scientists have gone in and done work to improve the habitat but not so thoroughly recorded the process. As a result, there are underlying assumptions concerning stream restoration work in the region that improving freshwater habitat will no doubt increase fish populations.

This guess, though a hopeful one, may not have enough proof behind it, according to the results of a new study published in the journal of the American Fisheries Society, Fisheries. Instead, its authors recommend a new type of approach to stream restoration that can gather enough data over the long term to make concrete assessments of fish populations following restoration work.

The emerging research method is known as intensively monitored watersheds or IMWs. It looks to gauge the benefits of stream restoration for salmon and other native fish in the Pacific Northwest, and from there reveal improvements in fish numbers, survival and reproduction in key rivers across the region.

The study looks at 17 IMWs in the Northwest that are beginning to provide detailed scientific insight into how the millions of dollars invested in river and stream restoration can effectively boost fish populations.

Key fish species in the region are salmon and steelhead, which have suffered from habitat loss and degradation. Bringing back their habitats is an important strategy for rebuilding their populations.

But researchers involved in the study, many of which represent state fisheries agencies and the National Oceanic and Atmospheric Administration’s National Marine Fisheries Service, are also concerned with conditions of climate, the ocean and other factors that can influence the fishes’ abundance. And so those factors sometimes make it difficult to identify and measure the specific benefits that habitat restoration provides.

Assessing the benefits requires a long-term approach, especially because steelhead and salmon populations can vary so widely from year to year. To get to a point where it’s possible to judge that the benefits seen in fish population is owed to restoration work, IMWs are typically heavily instrumented.

For salmonid fish, systems can be set up to track the fish as they grow from fry to adults, letting researchers see how they are responding to improvements like the reopening of wetlands, removal of dams upstream or addition of woody habitat to create areas for spawning and rest.

Researchers also say burying detection devices in stream bottoms to track electronic chips implanted in fish when they swim by is also a useful way to document just how many swimmers are using the restored habitat.

Taking the IMW approach has proven useful, scientists say, because it has made it simpler to show what sort of benefits that fish living in restored streams have experienced. For example, one case in Washington’s Asotin Creek documented a 250 percent increase in numbers of juvenile fish in recently restored sections of the stream. In another, juvenile coho salmon populations in Oregon’s Alsea River improved 300 percent in the winter following restoration of their rearing habitat.

Those finds and others are encouraging for researchers pushing the IMW approach, but they are still anticipating logging a more valuable finding one day: that productivity of restored streams increases to the point that successive generations of fish return in larger numbers to eventually rebuild populations of fish throughout entire watersheds. That would be a huge jump from the smaller-scale benefits so far seen only around areas where restoration activities have taken place.