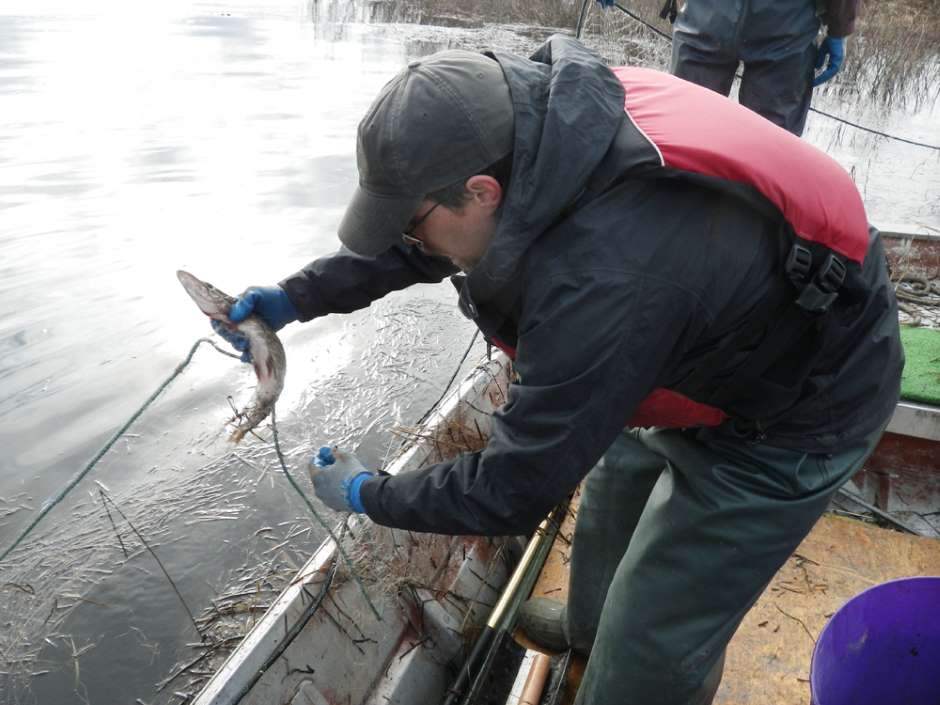 A new study suggests invasive northern pike likely crashed a popular Alaskan king salmon fishery all on their own, and state fisheries agencies could have their work cut out for them to undo the damage. Overfishing, dams and climate change all challenge salmon runs along North America’s Pacific coast, but the threat of Alaska’s invasive pike remains largely unnoticed outside of the state.

“It’s a huge problem because salmon are an important resource to the entire country, but I don’t really think that the salmon-pike issue is understood at a national scale,” said Adam Sepulveda, a biologist with the U.S. Geological Survey’s Northern Rocky Mountain Science Center and the study’s lead author.

Pike are native north of the Alaska Range, which runs high across the south central part of the state. Northern pike also thrive south of the range, but only because they were transplanted there, likely in bush planes flown by lakeside cabin owners looking to bolster their winter fisheries.

It was likely the 1950s or early ’60s when pike were introduced into Alexander Creek, which then had a healthy and popular Chinook salmon fishery accessible by a short 35-mile flight from Anchorage. By the 1990s, pike populations had skyrocketed while salmon disappeared. By the early 2000s, salmonids were doing so poorly that the state began closing fisheries for salmon, rainbow trout and grayling.

In 2011, the Alaska Department of Fish and Game got funding to suppress pike populations through extensive gill-netting in Alexander Creek’s side-channel sloughs. The agency wanted to get an idea of how many pike it would have to net and kill to benefit salmon. That created a research opportunity for Sepulveda, who had always been interested in working in Alaska. He tagged along on the netting operations, cracking pike over the head and preserving their stomach contents for analysis back at the Northern Rocky Mountain Science Center in Montana. He also gathered data on the pikes’ size and age, as well as water temperatures. He collected similar information from the nearby Deshka River where pike and salmon mix but the effect on salmon numbers hasn’t been as dismal as on Alexander Creek.

Sepulveda plugged all the data into a model to try and determine whether pike alone could have caused the creek’s salmon collapse in the ’90s, and how many salmon the fish and game department would have to kill to boost salmon numbers up to management goals. The results weren’t encouraging. A gill-netted pike with a stomach full of salmon fry (Credit: Adam Sepulveda)

“Pike had the potential, through consumption of salmon fry alone, to completely crash the population,” he said. “They eat enough salmon, and there are enough pike out there, that they could have caused the salmon population to go from being very abundant and semi-stable to almost disappearing.”

The results also suggest that the gill-netting project would have to virtually eliminate pike from the Alexander Creek system to allow salmon to rebound to management objectives. That’s a tall order, as eradication is a rare feat in the history of invasive species management. But pike are so good at vacuuming up juvenile salmon that even a few of the predators can make a big dent in the already flagging population.

“Even if you have 80 pike in there, because there are so few salmon currently, they can eat just about all of the salmon fry from the adults that are managing to return,” Sepulveda said.

That doesn’t mean that Alexander Creek is doomed, he said. The netting project appears to have drastically reduced pike numbers, and more salmon are returning annually — just not yet as many as necessary to rebuild a sustainable population.

The study is published online in the journal Ecology of Freshwater Fish.