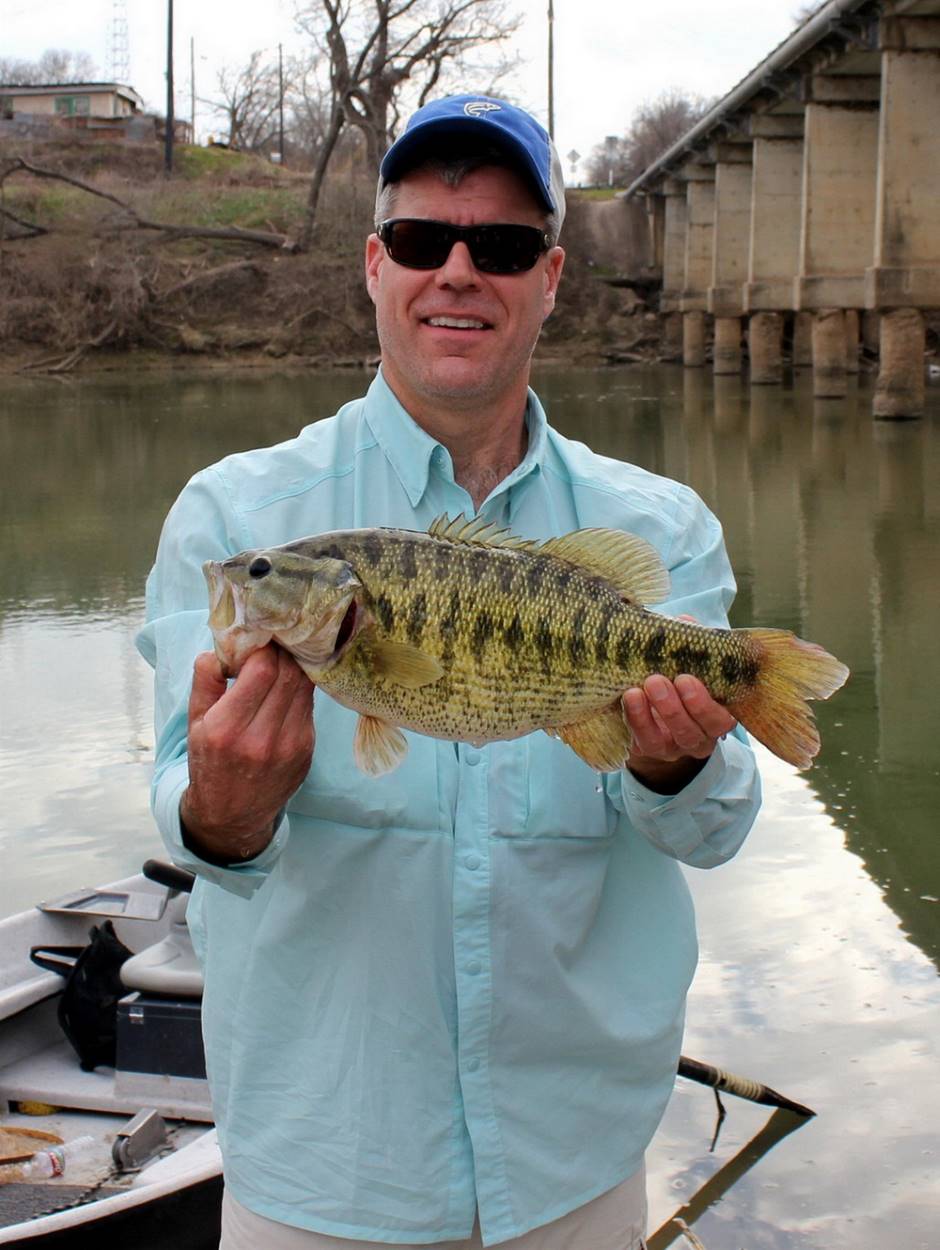 The Guadalupe bass, a Central Texas native and the target of restoration efforts in recent years, has become an angler favorite since it was discovered to be a distinct species found only in the state’s Hill Country.

But the popularity isn’t a result of its size, says Paul Fleming, a biologist with the state’s Heart of the Hills Fisheries Science Center. “If you catch a three pounder you’ve done something great,” Fleming said. “But for the size fish that they are they fight comparable to largemouth or smallmouth. They’re fun to fish for.”

They also live in a nice neighborhood, occupying the clear, rocky, cypress-lined streams normally associated with a more delicate class of fish. “It really does put you in mind of stepping into a small trout stream in the mountains somewhere, which is not real typical for Texas streams, except in the Hill Country area,” Fleming said.

The Guadalupe bass has evolved to swim in the fast currents of the San Antonio, Guadalupe, Colorado and Brazos river systems, making it ill-suited for the reservoirs and low flows that have become prevalent across the state. But the biggest threat has been the smallmouth bass that the state stocked in the region in the ’70s to improve fishing in Central Texas. “The unforeseeable consequence of that was they began to hybridize with Guadalupe bass,” Fleming said.

Without having the advantage of evolving in the same waters, Guadalupe and smallmouth never developed the distinctive spawning habits that tend to keep different species from intermixing. Once the two species were swimming together, they began mating and producing offspring with mixed genetics that took the place of pure Guadalupe bass. A 1991 study found that the fish were hybridizing in all four of the Guadalupe’s native basins. A more recent study in the Blanco River found no pure Guadalupe at all.

In an effort to preserve the pure Guadalupe in its namesake river, the state stocked 970,000 fingerlings over the course of 19 years in the upper Guadalupe River mainstem and three tributaries. The hope was that by saturating the system with pure fish, there would be plenty of same-species mates to go around and hybridization would be reduced.

The plan appears to be working. According to a 2013 study, annual monitoring showed hybridization rates quickly began to drop. In lower Johnson Creek, more than 30 percent of the bass were hybrids. Now that’s down to nearly zero.

The success of this so-called “supplemental stocking” is good news for the Guadalupe bass, and potentially other species threatened by mixing genes with non-native species. Any plan that doesn’t require the physical removal of the problem species is a useful tool.

“The obvious thing would be to go out there and take out all the smallmouth and all the hybrids and be done with it,” Fleming said. “But you can’t do that in aquatic systems. It’s just logistically impossible to be able to do that.”