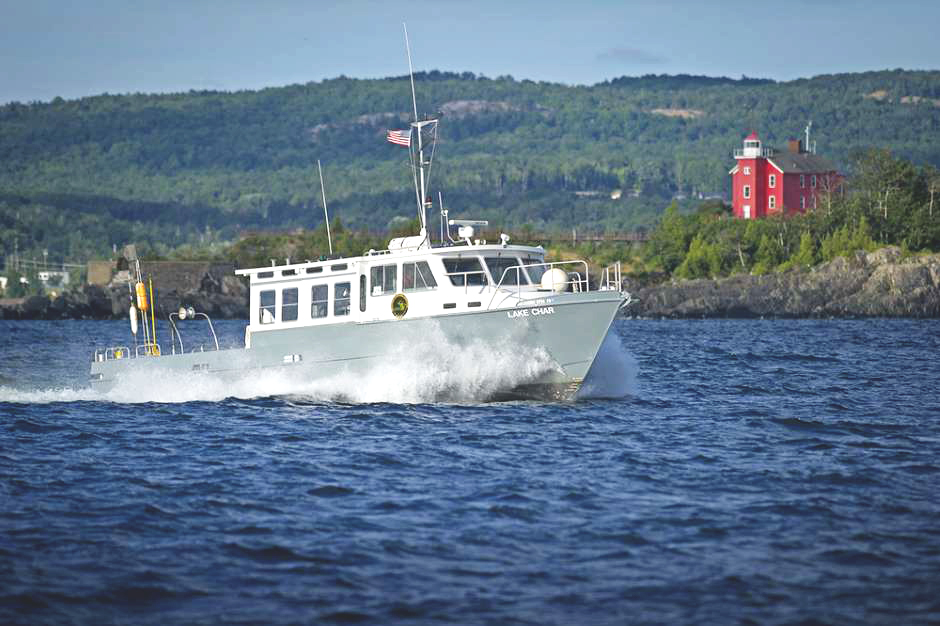 The Great Lakes fisheries survey conducted each year has become a quintessential part of conservation efforts in the region. The Great Lakes’ fishery brings in around $7 billion to the region’s economy every year. Today, eight states, one Canadian province and various tribal governments collaborate to protect the valuable aquatic resource.

Michigan does its share in part through the contribution of four fishery research vessels. Each year since the program’s induction in the 1960s, the vessels conduct a survey of Great Lakes fish populations, cataloging important data to ensure the ongoing preservation of the species that live there. The 2014 survey season that kicked off this spring will see cooperation between the Michigan Department of Natural Resources and various federal agencies, including the U.S. Geological Survey and the U.S. Fish and Wildlife Service.

“When the department took over the management of the Great Lakes, the lakes had a lot of significant problems,” said Gary Whelen, program manager with the Michigan DNR Fisheries Division. Those problems included invasive species, pollution and overfishing.

“For many years, we didn’t even require a fishing license,” Whelan noted.

History of the Great Lakes Survey

In the 1960s, the DNR Fisheries Division successfully introduced Chinook and coho salmon into the lakes and stemmed the invasive alewife populations. Salmon near the lakes’ shores renewed interest in recreational fishing and eventually resulted in the designation of new recreational zones.

“As a response to that program, we decided to enhance our abilities to survey the Great Lakes,” Whelan said. “We wanted to make the Great Lakes a resource for the state of Michigan.”

To meet this goal, the Fisheries Division commissioned several research vessels in 1968. Three of those original vessels — the Chinook, Channel Cat and Steelhead — carried out their mission in 2014. The Lake Char, a fourth research vessel commissioned in 2007, also joined the 2014 team.

Subjects of the Survey

Each vessel examines predator and prey populations and habitat quality in one or more of the lakes. The R/V Chinook oversees Lake Huron’s fisheries, specifically assessing trout and walleye populations. Lakes St. Clair and Erie are managed by the R/V Channel Cat, which focuses on walleye, yellow perch and lake sturgeon. Both vessels work together to evaluate fish communities in Saginaw Bay.

In 2021, the Michigan DNR completed 260 fishery surveys. The focuses of the studies were:

Each of these surveys is important to understanding the Great Lakes’ wildlife and cultivating safer habitats.

The survey vessel S/V Steelhead performs various tasks, from population evaluation for several species to a summertime forage fish evaluation conducted with the USGS and the U.S. Fish and Wildlife Service.

“The data these boats collected are absolutely critical to the management of the Great Lakes, and we openly share this data with the other states,” Whelan said.

Sophisticated population models developed from the data are used in statistical “games” to determine how regulatory policy might affect certain populations. Some of the data is integrated into online maps that improve public knowledge of the Great Lakes.

“No one cares about a database, but when they see it on a map, they instantly understand,” Whelan said.

Michigan’s DNR is one member of the Great Lakes Fishery Commission, an entity that coordinates research and management efforts between the U.S., Canada and tribal governments. Whelan said that the commission is a vital part of maintaining the Great Lakes.

The Future of the Great Lakes Fisheries Survey

“In the last 20 years, we have made big strides, some of which have been in response to crises,” Whelan said. One of the crises Whelan referred to was the collapse of the Chinook salmon fishery in the mid-80s. A virulent kidney disease swept through salmon populations already weakened by a loss of forage base, decimating their numbers. Despite the damage, the event helped bring the various governing bodies of the Great Lakes together.

Whelan touted the Great Lakes Fishery Commission as “one of the best lake management strategies in the world.”

“It’s a pretty remarkable model, and it has gotten better over time as we build the communication bridges between our agencies,” Whelan said. “I think it works pretty darn well for the Great Lakes.”