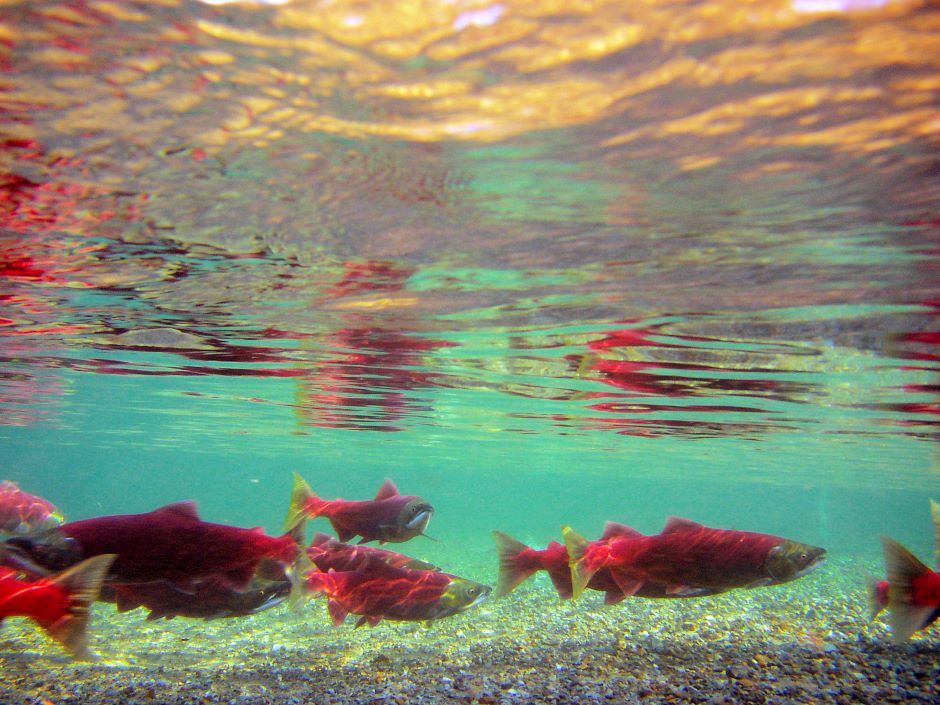 When it is time to spawn, sockeye salmon turn from silver to a bright red color with a green head, as seen here underwater (Credit: D. Young / NPS)

While news of declining salmon populations is no surprise, the severity and permanency of the problem is often overlooked. As temperatures climb due to climate change, salmon health declines. The Columbia and Snake Rivers have become too hot to support sockeye salmon, and the species has suffered many causalities in the climate crisis.

Officials from across the country are scrambling to respond to the issue, but lowering a river’s temperature is easier said than done. NRDC reports that the Columbia River is currently 71 degrees Fahrenheit, exceeding the legal limit of 68 by seemingly just a few degrees but indicates the beginning of the end.

The 68-degree maximum was established by scientists hoping to protect salmon in the Columbia River, but the dams spread throughout the Columbia River Basin have led to increased temperatures. Dams prevent water from escaping downstream, leaving stagnant reservoirs that eventually travel downstream and heat up the rest of the basin.

2021 was not the first time that Columbia River Sockeye found themselves in hot water, but was preceded by years of climbing temperatures and a particularly harsh year in 2015. Roughly 250,000 sockeye died in the Columbia and Snake rivers due to hot water. Unfortunately, a majority of the fish attempted to find refuge and died in the Little White Salmon River and nearby tributaries.

Scientists are not hopeful for the future of the river and its inhabitants, with many believing that these climate-related fish kills will only become more common as climate change and dams continue to warm the basin. In fact, some believe that the 2015 event indicated the beginning of the extinction of Snake River sockeye.

Higher temperatures cause fish to consume more dissolved oxygen leading to hypoxic dead zones throughout the habitat and the introduction of diseases. Footage of diseased salmon went viral in 2021 for featuring a wild sockeye covered in lesions and fungus, both of which resulted from thermal stress.

The video sparked national outrage and has helped push more conversations surrounding biodiversity and protecting wildlife. The salmon trapped downstream in the Columbia and Snake Rivers will likely never make it upstream to spawn due to the dams and lack of fish passages. Local groups fear that these fish will die downstream and in offshoots of the river as a result of disease and heat stress without ever spawning.

With the current population declining and the chances for future generations of sockeye salmon in the Columbia River Basin in danger, preserving the species has become an uphill battle. Removing dams would help lower water temperatures and, while not a fix-all solution, would prevent heat stress and lower susceptibility to disease.

Strategies and Proposals to Save Sockeye Salmon

NRDC reports that Tribal Nations, fishing groups, and conservation organizations have come together to pressure the Pacific Northwest congressional delegation to obtain funding to breach the four lower Snake River Dams. Breaching these dams would allow everything downstream to be cooled as the river can cycle cool and well-oxygenated water passed dam sites.

Don Sampson, Northwest Tribal Salmon Alliance, said to NRDC, “The sockeye here are dying . . . They are suffocating. You can see they are in lethally hot water. We’re in a salmon crisis and it’s time for Congress to act.”

Giulia Good Stefani, a senior attorney with NRDC, added, “Salmon support a way of life for both native and non-native rural communities from the coast to the Northern Rockies. The reservoirs behind the four lower Snake River dams are reaching deadly temperatures, and the time to take action, both ecologically and politically, is right now.”