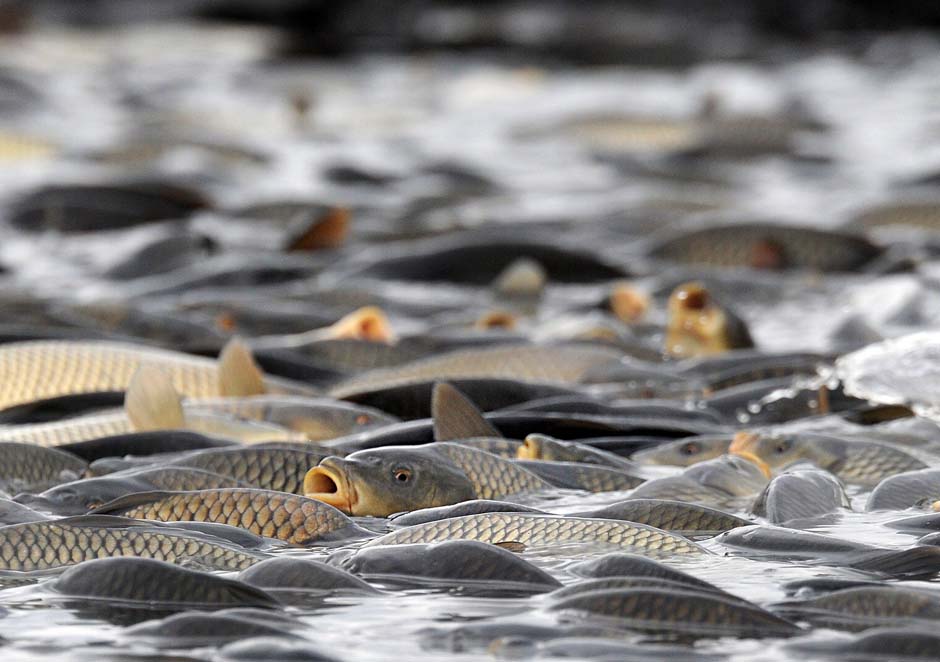 Dissolved oxygen levels can change for any number of reasons and do so throughout the day.

In aquaculture, the biggest factor driving down dissolved oxygen levels are the animals you’re raising. As fish or shrimp breathe, they remove oxygen from the water and add carbon dioxide, just like people do on land. On land, trees and other plants take the carbon dioxide we produce and turn it back into oxygen. In an aquatic system, algae do the same. A system of all fish, no algae (or other plants), would quickly become a system with little to no dissolved oxygen.

In emergency situations, substances like hydrogen peroxide can be used to raise dissolved oxygen levels in aquaculture ponds. An aerator in an aquaculture pond in India. (Source: Wikimedia, Lupo)

Three: How do I measure it?

Four: What can go wrong?

Research by Dr. Eugene Torrans showed that while catfish can survive dissolved oxygen levels at 1.0 parts per million (ppm), at levels of 3.0 ppm, the fish ate and grew twice as fast.

While different fish can tolerate different levels of dissolved oxygen, low oxygen is never a good thing. Fish in low oxygen water will lose their appetite and exhibit low energy. They become more susceptible to disease, inefficiently digest their food and grow slowly.

Five: How can I address problems with dissolved oxygen?

If low dissolved oxygen happens, there are steps you can take. Ramping up or adding additional aeration to your ponds can help evenly distribute high oxygen water and get additional oxygen into the water. Mixing the water in other ways, like spraying water across the top of your pond, using a pump or other mechanical mixer, or swapping oxygen-poor water out for oxygen-rich water can help boost your dissolved oxygen levels.

Also, because dead plants and animals use up oxygen as they decompose, keeping your ponds relatively clear of dead organic matter keeps oxygen from being used for something other than growing your fish.

Six: What concerns should I have if I’m farming a pond?

Because aquaculture ponds are closed systems with only the resources you provide, it’s imperative you keep a close eye on dissolved oxygen levels. Because fish won’t be able to seek out oxygen-rich waters elsewhere (though they may move up or down the water column within a pond to seek out oxygen), it is vital they have a reliable, steady supply of oxygen available. Seven: What role do plankton play?

Dr. Claude Boyd, in the Global Aquaculture Advocate, writes that phytoplankton and algae, as the most important producer of oxygen in an aquaculture system, have a major effect on how much dissolved oxygen is available.

Phytoplankton create oxygen through photosynthesis, a process that requires the sun. This means that oxygen levels will rise throughout the day, but fall during the night. After the sun sets, photosynthesis stops—no more oxygen is produced—but respiration by aquaculture fish continues—oxygen is used up. This creates a natural daily cycle, with dissolved oxygen peaking in the daytime and reaching their lowest points just before the photosynthesis starts again in the early morning.

The amount of algae in a pond can affect the amount of oxygen at different depths throughout the pond as well.

Photosynthesis requires light. If a thick layer of algae grows on the top of a pond, it blocks light from deeper water and restricts photosynthesis—and therefore oxygen production—at that level. This could result in hypoxic water at deeper levels and require some sort of intervention.

Eight: What is a dissolved oxygen budget?

Photosynthesis – respiration by fish – oxygen lost to water and mud ± oxygen gained or lost to the air.

Plugging the numbers into this equation takes some work and reliance on researchers who have calculated the amount of oxygen produced by plants or used by fish. We’ll discuss it more in depth in future posts. At this point, understand that if you’re taking more oxygen out than is being generated, you’re headed for trouble sooner or later.

Nine: What do I need to know to get started?

Now you’ve got the basic understanding of dissolved oxygen’s role in aquaculture systems, how to monitor it and how to address low dissolved oxygen. There’s plenty more to read—coming soon to this blog and around the web.

But if you’re itching to get going, the best thing you can do is get yourself a dissolved oxygen sensor and start tracking your levels. Your fish and your bottom line will thank you!

Top image: Fish at the surface of an aquaculture pond can be a sign of depleted dissolved oxygen.