Finding The Right Aerator to Maintain Dissolved Oxygen in Aquaculture 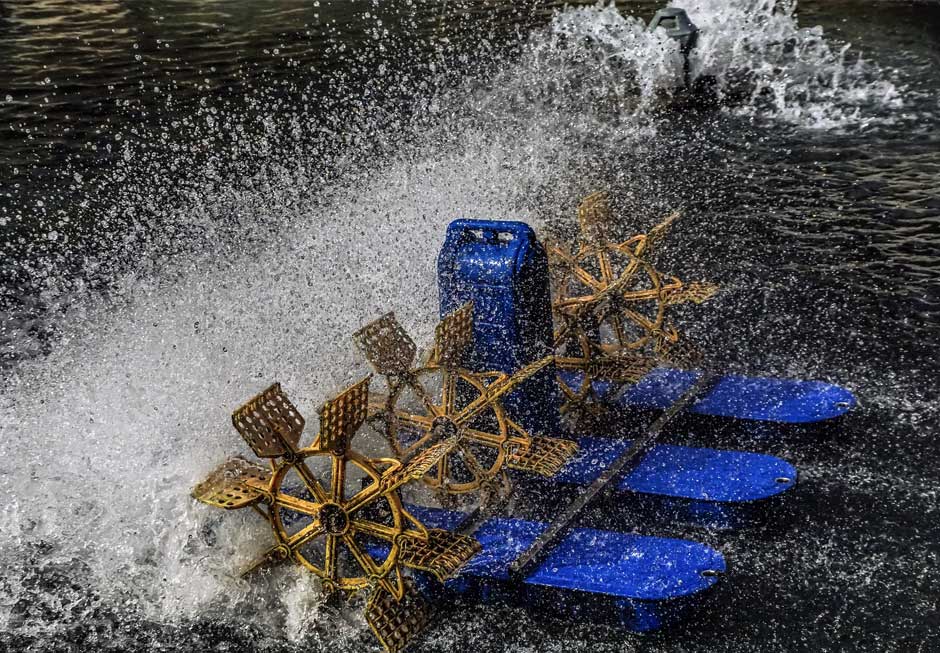 In our last couple of posts, we’ve been exploring questions about dissolved oxygen and some of its dynamics in aquaculture ponds.

In this post, we’ll look at a vital piece of equipment in addressing dissolved oxygen issues: the aerator.

Aeration of water occurs in countless ways. In nature, waterfalls and rushing water create the cool, oxygen rich water that makes for great trout streams. Crashing waves churn oxygen into coastal marine waters. Wind can help aerate surface waters and even on a calm day, oxygen from the atmosphere will be absorbed into water with a dissolved oxygen deficit.

But, an aquaculture operation almost certainly can’t rely on these natural phenomena for all of its dissolved oxygen needs. Instead, aquaculturists turn to mechanical and chemical means of ensuring dissolved oxygen doesn’t fall to dangerous levels. An aerator is a key piece of equipment in maintaining a healthy stock and a productive operation.

Read on to explore the aerator options available to you.

How quickly oxygen will transfer from the atmosphere to a body of water is described by the gas transfer equation.

Craig Tucker, a former professor at Mississippi State University and now a researcher at the United States Department of Agriculture (USDA), writes that “the rate of oxygen transfer between air and water depends on three factors: the amount of turbulence, the ratio of surface area to water volume, and how far the prevailing dissolved oxygen concentration deviates from the dissolved oxygen concentration at saturation.”

Oxygen in the air will transfer to water with oxygen below the saturation point, Tucker writes. But, if the top layer of water becomes saturated with oxygen and eliminates what’s called the saturation deficit, the transfer can stop, even if deeper water still lacks oxygen.

“Turbulent mixing restores the saturation deficit in the surface film by moving oxygenated water away from the surface, increasing the overall rate of oxygen transfer,” Tucker writes.

Simply put, mixing up the surface of the water and bringing to the surface low-oxygen water from a pond’s bottom will help the pond more quickly absorb oxygen. Paddle wheel aerators come in a lot of shapes and sizes, but they are all variations on the same design. An engine rotates an axle with paddles radiating out from it. The paddles mix the water, adding air into the pond.

The paddles create bubbles and throw water into the air, increasing the amount of water in contact with the air at any given time. As we know from the gas transfer equation, the more water comes in contact with air; the more oxygen will be transferred, up to the dissolved oxygen saturation point.

Paddlewheel aerators come in many sizes and can fit most operations. Tucker writes that they are the most common type of aerator in large ponds.

Because paddlewheels, depending on their size and design, can create powerful currents, a balance must be struck between oxygenation and fish health, Tucker writes. If fish have to swim unnecessarily against a current, they burn energy they could be turning into additional weight. Aeration should be carried out thoughtfully.

The USDA (in a 2011 publication, Aeration of Ponds used in Aquaculture) notes that these types of aerators take a bit more work anchoring them to the pond bed. Tucker says they aerate a narrow area of a pond, so work best in smaller ponds—an acre or less—or when more than one of them is used.

The USDA notes that mobile versions of these aerators are “a popular choice for emergency aeration operations. They can be quickly moved from pond to pond and operated in shallow depths with little concern for suspension of pond sediments and wastes.”

Propeller-aspirator aerators: Working beneath the surface

Instead of throwing water through the air or sending air through the water, they suck air into the water by pumping water past an empty pipe that reaches to the surface. This creates a vacuum, which sucks air through the pipe and into the stream of water. The air and water mix and oxygen dissolves in the water as it returns to the pond.

Since the system pumps water at a high velocity, it also serves to mix the pond.

Bubble aerators, or diffusers, are the gentlest of the aerators we’re looking at today. Instead of moving the water, they move the air.

Air gets pumped down to the pond floor to a structure called a diffuser. A diffuser is punctured all throughout with small holes, which creates bubbles of air that float to the surface. As they travel through the water, they leave behind dissolved oxygen.

In certain circumstances, bubble aerators can be really efficient, adding more dissolved oxygen to the water than any of the other aerators discussed here. But, a few things influence that efficiency.

Aerators that produce smaller bubbles will be more efficient than ones that produce large ones. Further, diffusers work better for deeper water. In deeper water, bubbles travel longer before reaching the surface and have more time to transfer oxygen to the water.

In ideal circumstances, diffusers can be highly efficient, but real-world conditions can significantly reduce their efficiency.

Diffusers pose several challenges to pond aquaculture. They can get in the way of harvest and can get fouled easily. Therefore, they are used more often in tanks and runs.

The relevant measure of aerator efficiency is called standard aeration efficiency (SAE). SAE is the amount of oxygen in pounds per horsepower per hour that an aerator will add to a pond.

The USDA’s Aeration of Ponds used in Aquaculture reproduces the following table from a 1998 publication by Claude Boyd, then a professor at Auburn University.

This chart makes clear that not all aerators are equal. Water conditions and pond shape, size and access all impact which aerator will best perform and best fit an aquaculturist’s needs.

The good news is there’s an aerator to fit every need. It’s just a matter of choosing the right one.

Top image: Paddlewheel aerators aerate an aquaculture pond by creating turbulence on the ponds surface and mixing the pond.