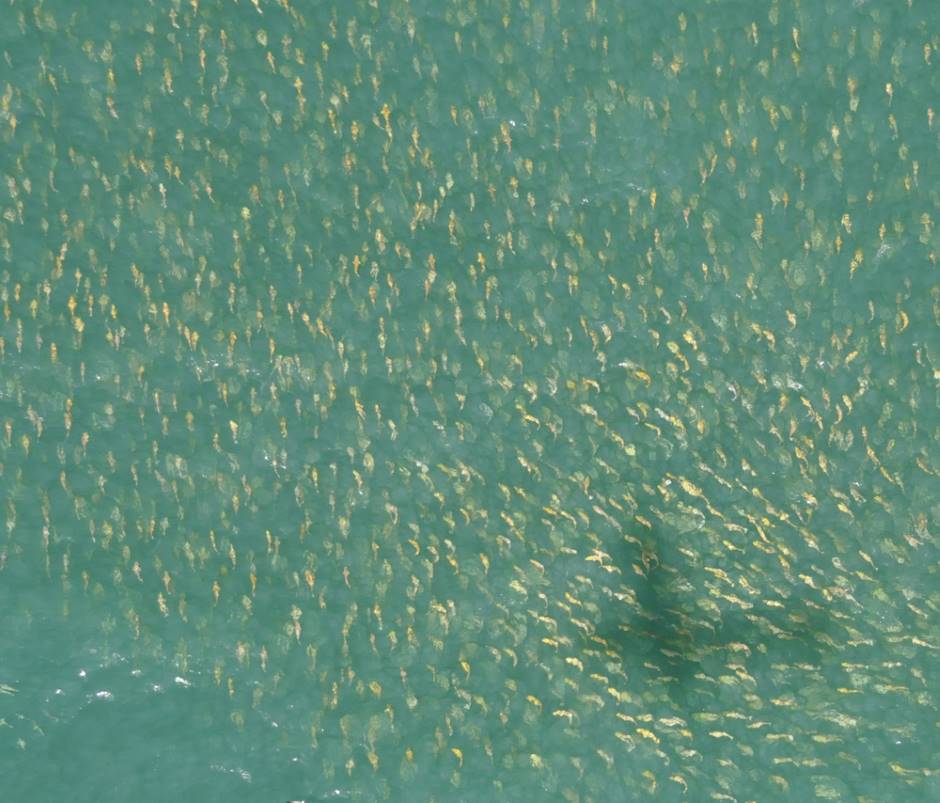 A thousand-strong school of redfish in the shadow of a spotter plane. (Credit: Alison Amick/FWC & FWRI)

Back in the 1980s, the Gulf of Mexico’s angler-favorite redfish were turning up in great numbers blackened on dinner plates. As the species’ popularity boomed as an entree, its population suffered.

That prompted a ban on commercial harvests in the late ’80s that remains in effect today. After 20 years of regulations, a new study shows the redfish population in some Florida waters looks better across its entire life cycle, from the juveniles in backwater nurseries to the adults that school offshore.

The study relied on decades of data from a fisheries monitoring program that targeted redfish in every type of habitat they use throughout their 30-plus-year lives. That approach was helpful because the chances of being wrong are greatly increased when just looking at one part of the population, said Brent Winner, associate research scientist with the Florida Fish and Wildlife Conservation Commission and lead author of the study.

“It’s not perfect,” Winner said, “but it definitely gives you multiple windows into the life history of the fish that allows you to confirm what you’re seeing from several different angles.”

Crews captured small juvenile redfish in the tidal rivers of the Tampa Bay estuary with small mesh seines. Large juveniles were caught along bay shorelines with large mesh 600-foot seines. For young adults, they spotted schools on grass flats from a boat and quickly encircled them with a trammel net as long as six football fields. Spotter pilots tracked down schools of adults in nearshore waters of the Gulf and radioed their location to a vessel hauling a purse seine like those used by many commercial fishing operations.

A redfish school is a spectacular sight from the air, according to Winner.

Much of their research replicated a similar study published in 2001 that found very few fish older than 12 years old in the schools of adults. For a long-lived species, that indicated that the population was still stressed after 10 years of commercial restrictions. The results of the new study, on the other hand, show many more older adult fish.

“All those age classes, from 13 years out to 20-some, all doubled or tripled in their relative abundance in those spawning schools,” Winner said. “Which was a great sign of survival.”

That’s good news for anglers, as the popularity of chasing redfish continues to grow, Winner said. After decades without changes to Florida’s recreational regulations, the bag limit in the state’s northern waters was increased from one fish to two in 2012. Though the fishery, which operates on a 18- to 27-inch slot limit, is mostly catch-and-release, Winner said.

The study, published online in the North American Journal of Fisheries Management, is something the researchers would like to repeat in the state, though that could depend on funding similar to the federal grant that supported this round. Studies like this one in other locations throughout the Gulf would provide useful information to fisheries managers, who are facing pressure to relax regulations and reopen federal waters to redfish harvest, Winner said. The crew plays out a 600-yard trammel net as it encircles a school of young adult redfish on a grass flat (Credit:FWC/FWRI)