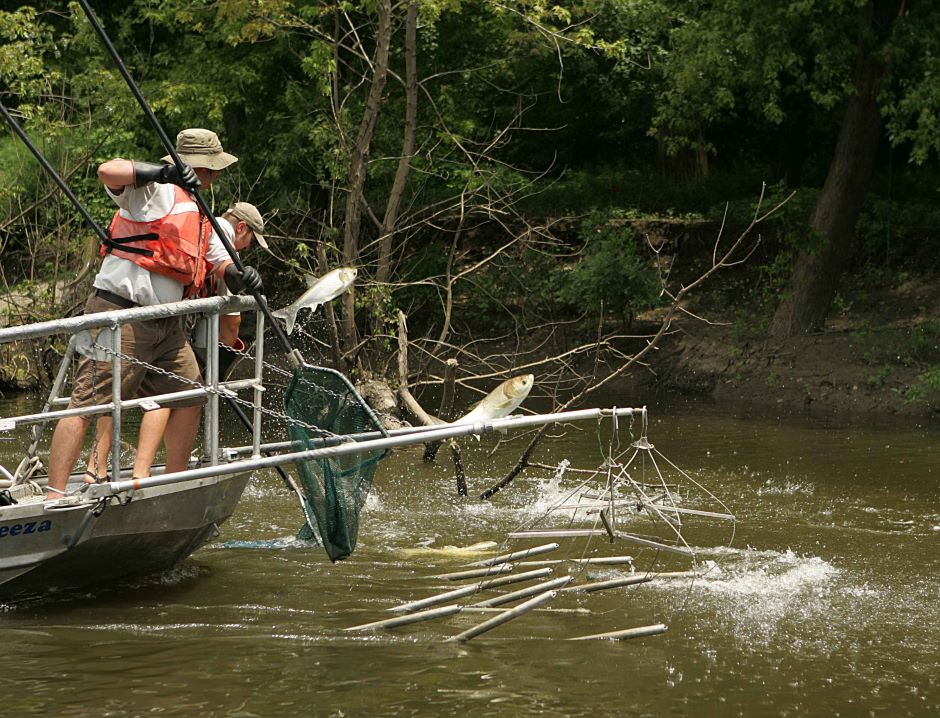 For years, the respective Lake Erie management teams of the U.S. and Canada have worked together to protect Lake Erie from the invasion of Asian Carp. As the invasive species works its way up the rivers connected to the Great Lakes, resource managers are worried about how a new species may impact the ecosystem in unique and previously unconsidered ways. While Grass carp have been found in Lake Erie for a number of years, the species has largely been confined to the western portion of the lake and is heavily monitored, according to the USGS. Current concerns over Asian carp invasions surround the bighead and silver carp as they are known to warp ecosystem structures and harm anglers and equipment.

While the more well-known impact is the fish’s ability to outcompete other large fish, the National Centers for Coastal Ocean Science is worried that the species might influence new changes to the established food web of Lake Erie. The predicted biomass of the species, if it were to invade, is up to 34 percent of the total fish in Lake Erie. And while the NCCOS reports that this number is lower than the 60 percent found in the Illinois and Mississippi rivers, the population size could still change the food web.

Lake Erie is the most vulnerable of the Great Lakes to be invaded due to it offering the best potential habitat for the species. Even so, despite earlier doomsday predictions, the species is expected to integrate into the food web without causing any major disasters. Certain species are expected to decline as they are outcompeted for food, but others are projected to increase as juvenile carp will create a consistent supply of food for native species. Of course, this still changes the established ecological patterns of the region, but with comprehensive management, the ecosystem ought to self-regulate and stabilize, according to the NCCOS.

A bighead or silver carp invasion could still spell trouble for locals, but if predictions are accurate, the region should have nothing to fear. This mentality was a total shift from earlier concerns from NOAA in 2016, wherein the organization was concerned that an Asian carp invasion would spell trouble for the region’s most prized sport fish. And as it turns out, the two theories may be tested in the near future. In July of 2022, silver carp eDNA was found during routine sampling around Presque Isle Bay in Erie, Pennsylvania, according to Michigan Live.

Researchers routinely check eDNA in this region in order to search for invasive species and help determine species distributions within the lake. Fortunately, the amount found was very small and doesn’t necessarily mean the species is residing in the lake. The reported results led to an electrofishing initiative to uncover silver carp, as the species is notorious for leaping out of the water when feeling threatened. Electrofishing often has dramatic results when conducted in waters where the species is present. The Lake Erie results revealed no leaping silver carp and likely rules out any concerns of invasion.

The eDNA could have been introduced into the lake through a number of ways. The Pennsylvania Fish and Boat Commission supplied several scenarios that would have led to the presence of eDNA without any fish. In a press release, the PFBC stated, “bird feces, water transported in the live well of a recreational boat recently in waters infested with silver carp, or from melted ice used to store silver carp at fish markets that flowed into storm sewers.”

Since electrofishing turned over no results, the plan for local management teams is to continue sampling and monitoring. If eDNA concentrations increase, there may be further evidence of invasion, but years of preparation should mitigate any potential damages caused by the species’ introduction. Even further, the Lake Erie ecosystem should not suffer any major losses.

Molly Flanagan, chief operating officer for the Alliance for the Great Lakes nonprofit in Chicago, shares with Michigan Live that she is not concerned by the sampling results. She states, “Any detection of eDNA is concerning but we have seen this happen before without evidence of a fish or a history of detection … [and] you need a critical mass of fish to establish a population.” In all likelihood, the eDNA was introduced to the lake indirectly, and even if there were silver carp in the lake, the population size is so insignificant that it is unlikely to cause any issues.