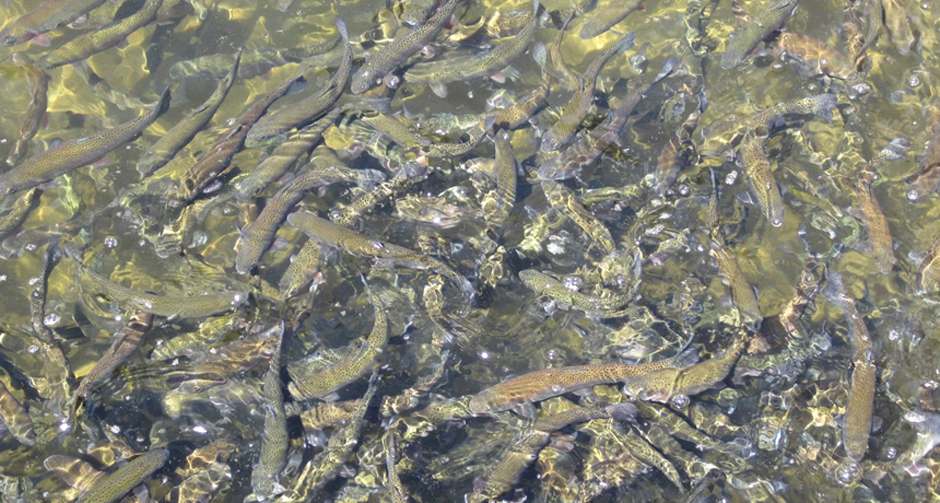 Migratory fish might as well come equipped with a GPS, swimming large tracts of the open ocean seemingly without getting lost.

Earlier this year, a team of Oregon State University scientists found that young Chinook salmon navigate the North Pacific by orienting themselves with the Earth’s magnetic field. The same group conducted a follow-up study months later and learned that iron and steel materials used in many fish hatcheries could interfere with the navigational ability of juvenile steelhead trout.

“When working on these experiments at a research hatchery, we quickly realized that many of the locations where we might have put our fish had very unnatural magnetic fields,” said Nathan Putman, the study’s leader and postdoctoral researcher at OSU.

Fish sense the intensity and inclination angle of the Earth’s magnetic field to pinpoint their location. Unfortunately, iron pipes and steel rebar used in hatchery structures locally distort that field. Putman wanted to examine fish raised in magnetically natural and unnatural environments to determine exactly how sensitive they are to magnetic distortion.

The researchers reared juvenile steelhead, obtained from local hatcheries, in two groups. One group lived under normal magnetic conditions, while the other was raised within a distorted magnetic field created by placing the group’s tank above an iron pipe running with creek water.

To determine the effects of the distortion, researchers placed each fish in one of 20 5-gallon buckets set on a raised platform and surrounded by loops of copper wire. Suspended in a 10 foot by 10 foot wooden frame, the wires simulated the magnetic properties of the North Pacific. The researchers confirmed the conditions with a tri-axial magnetometer contributed by the paleomagnetic lab at OSU.

After the fish spent 10 minutes in the buckets, the researchers flipped the magnetic field to a far north or far south bearing. Eight minutes after the switch, an overhead camera snapped a photo of the bewildered fish.

“The timing is somewhat arbitrary, but our goal was to give the fish enough time to realize that the field had changed around them and they should swim another direction,” Putman said, “but not so much time that they realized they weren’t in the Gulf of Alaska.”

The results were clear: the juvenile steelhead reared in normal conditions altered their swimming direction in accordance with the switch in magnetic directions. However, those raised amid magnetic interference did not display keen map sense and swam in random directions. But to Putman, that wasn’t the most surprising aspect of the study.

“The biggest surprise to me remains that we can study ocean navigation behavior in salmon and steelhead using 5-gallon buckets and some copper wire in a rural town in western Oregon,” Putman said.

Future studies will look at the effects of tagging on fish’s navigation abilities and the “resolution” of the steelhead magnetic map. Putman said the team is seeking funding for a large-scale experiment that would monitor return rates for thousands of fish and could potentially influence fishery management practices.

“This is the first clear demonstration that hatchery practices inhibit the navigation abilities of steelhead or other salmon,” Putman said. “However, I think further research… is needed to confirm the magnitude of this problem and thus set the scope for what should be done to fix it.”

A 2022 study, also conducted by Oregon State University, revealed that salmon do indeed have an internal GPS. The study, led by Michael Banks, theorizes that magnetite crystals form in specialized receptor cells of salmon. Banks believes this internal compass phenomenon may be the case for many migratory fish.

“Salmon live a hard and fast life, going out to the ocean to specific areas to feed and then coming back to their original spawning grounds where they die. They don’t have the opportunity to teach their offspring where to go, yet the offspring still somehow know where to go,” stated Banks.

At first, this study seems to harm the findings of Putman, but this study actually proves that Putman was right in believing that natural salmon had something that those reared in proximity to metal did not. Both salmon have the capacity for perfect navigation and use of their biological feature, but some have never had to use these features. Furthermore, magnetite responds to the magnetic field, and these receptors will resemble a spinning compass if they are in a disrupted zone.

Wild salmon learn how to use their GPS as they develop with a functional receptor. In contrast, salmon that grow up in hatcheries are exposed to metal that interferes with magnetic field readings. In short, these farm-raised salmon do not understand how to use their internal compass. This study helps to further research and understanding of migratory fish everywhere.