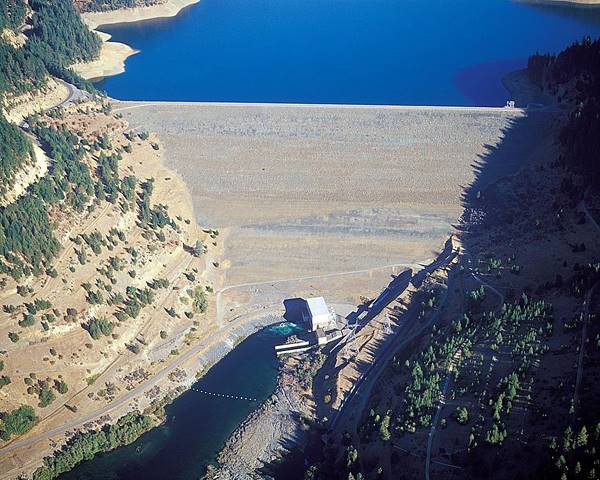 The Trinity Dam on the Trinity River is one of the dams flagged by the study (Credit: Michael Nevins/U.S. Bureau of Reclamation)

Salmon and other native fish across California are threatened by inhospitable streamflows altered by some of the states thousands of dams. The controversial work of getting flows right for fish can’t begin until managers know which dams might be causing problems. Luckily, a new screening tool has narrowed the list down to 181.

The tool, developed at the University of California, Davis, identified dams that likely disrupt the region’s seasonal flow patterns that native fish have adapted to and depend on. If threatened species were known to live downstream of a potential offender, the tool flagged the dam as a high priority for conservation attention.

The screening tool could be useful anywhere in the world where a high density of dams makes a daunting task of knowing where begin when establishing fish-friendly flows. That’s certainly the case in California, according to Ted Grantham, USGS research biologist and lead author of a study that applied the screening tool to 753 of the state’s large dams.

“We have this huge geographic area, and we have literally thousands of dams,” he said. “Where do we start?”

California fisheries managers and dam regulators now have 181 answers to that question, thanks to the data-driven approach described in the study, published in BioScience. The list could be particularly useful in finding sites out of compliance with a poorly enforced state law, one requiring dams to maintain flows that support fish downstream.

“It’s a pretty unambiguous intent,” Granthm said. “Regardless of who owns the dam or what you’re managing for, you have to leave enough water to keep the fish alive and in good condition.”

But it’s rarely enforced without a lawsuit. For example, the law played a role in a 2006 ruling that led to operators on the Friant Dam on the San Joaquin River to release more water to support the river’s run of Chinook salmon. Folsom Dam on the American River is one of the dams flagged by the study (Credit: Michael Nevins/U.S. Army Corps of Engineers)

Many large dams on salmon streams already get attention ensuring salmon have flows to support migration and summer rearing habitat needs. The list could help raise the profile of dams threatening the less-glamorous segment of California’s native fish: dace, suckers, chubs and the like. Many of the states native fish are found nowhere else on Earth, and around 80 percent of the species could face extinction in the next century if nothing changes, Grantham said.

Those changes often sound painful to farmers and other users of the water stored behind and diverted by dams. Grantham said there are inevitably tradeoffs in managing dams for fish and other water uses, but they’re not necessarily as severe as might be expected. On Putah Creek, a Sacramento River tributary, changes to the timing of water releases netted a “huge benefit” to native fish communities through relatively small increase in the total amount of water released annually, Grantham said.”

“You don’t need to restore a completely natural flow regime. You just need to restore the key elements that the species are really adapted to,” he said. “It’s all about releasing water at biologically critical times of the year.”

Not every dam on the list is violating the state law requiring safe flows for fish, nor are they necessarily damaging fish populations. But the list gives managers a strategic approach for finding the places where fish are the mostly likely to be dealing with those issues — the sort of leg up that could be beneficial around the world.

“This idea that we need a way to prioritize the rivers on which we focus our conservation attention – that has global resonance,” Grantham said.