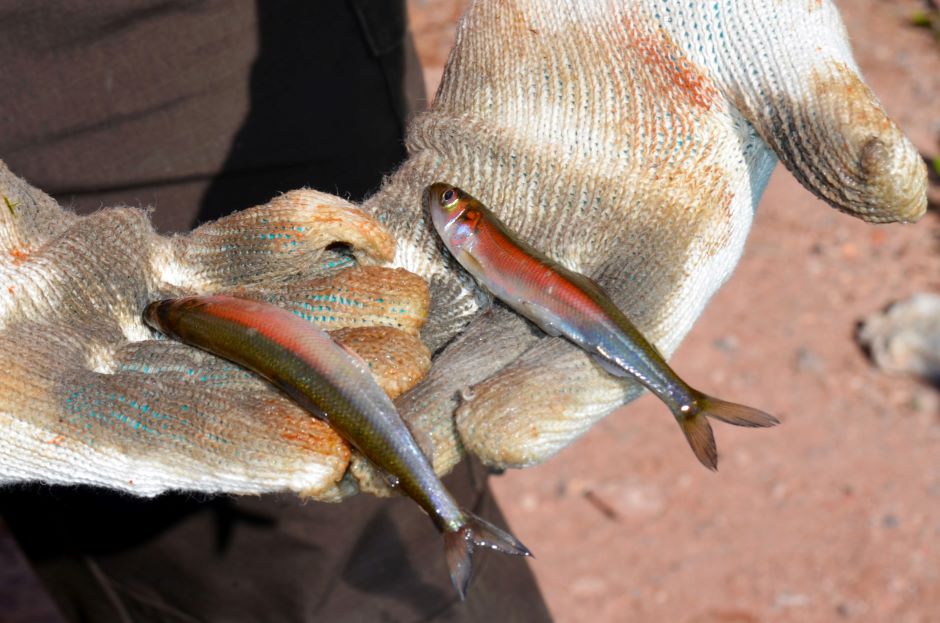 Wisconsin walleyes are one of the most sought-after freshwater fish in the Midwest. The fish are popular catches amongst recreational anglers but have also earned their name in the commercial sphere. The fish is popular in homes and restaurants across the U.S., so it’s no surprise that the state of Wisconsin is invested in the species’ well-being.

Unfortunately, the species has fallen under threat in recent years as a result of “climate change leading to warming lake waters, loss of habitat, starvation, larvae not reaching adulthood and chemicals,” states Zach Feiner, an ichthyologist and researcher at the University of Wisconsin Madison and liaison with the Wisconsin DNR, in an interview with WKOW.com. In order to combat the losses, resource managers in the state have sponsored stocking efforts for the past several years.

Much like other stocking efforts that have occurred with various species and waterways across the country, these efforts are intended to stabilize the population. Simply, stocking programs are meant to ensure there are enough walleye that reach spawning age to preserve the population the following year. Combined with the stocking efforts, The Wisconsin DNR has instituted catch limits to protect the species from being overfished.

While many anglers have complied with these catch limits in order to preserve the resource for the future, fellow fish haven’t seemed to get the memo. Instead, the walleyes stocked from hatcheries in the state have quickly become the preferred meal of invasive rainbow smelt. And while the threat has predominantly impacted inland lakes, there’s no telling how far this issue could spread. State resource agencies dedicate a great deal of money to the raising and stocking of walleye–rainbow smelt make those expenses null.

Walleye are not the first or only victims of rainbow smelt’s voracious appetite. According to the Wisconsin Seagrant, “Rainbow smelt prey upon many native game fish, including lake trout, cisco, whitefish and walleye. They contributed to the extinction of the blue pike.” Adult smelt only grow to a maximum of 12 inches, though many specimen are smaller, so the walleye most at risk of being munched on are fry and juveniles since adult walleye typically range from 15 to 20 inches.

Rainbow smelt have already invaded 24 Wisconsin lakes, collapsing walleye recruitment in Long Lake, Sparkling Lake, Dead Pike Lake and others. Another 550 lakes across the state could potentially support a smelt invasion, according to Zach Lawson, a fisheries biologist with the state’s Department of Natural Resources. Instead of increasing the number of walleye stocked in hopes of offsetting any losses caused by smelt, the state instead looked to develop a new strategy for rearing and stocking.

“With a lot of these smaller lakes in northern Wisconsin especially, these rainbow smelt get in and wreak havoc on the native fish community, and in particular walleye,” he said. 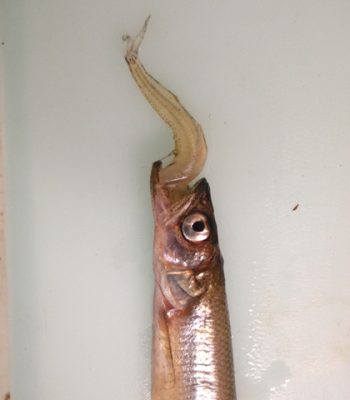 A smelt caught dead with a young-of-the-year walleye stuck in its throat (Credit: Zach Lawson)

Lawson said biologists don’t have a great handle on all the ways smelt impact walleye, but they do have some insights. The problem goes beyond smelt eating young walleye–they also harm adults. It looks like young walleye and smelt compete for the same plankton food sources, and adult walleye that eat too much smelt may develop a vitamin deficiency that hampers reproduction.

While keeping smelt out of the stomachs of walleye isn’t a simple solution, Lawson believed hed at least be able to protect the stocked walleye from being devoured. In lakes where smelt have invaded, and walleye have declined, the state depends on stocking to preserve the species while providing valuable fisheries. But stocking doesn’t always work, especially if the planted fish are small enough for smelt to eat right away.

The tool — a mathematical model — lets managers plug in information on the size of smelt in a particular lake. It turns that into an estimate of how large stocked walleye will need to be to make sure they don’t immediately become lunch.

Lawson developed the tool while a student at the University of Wisconsin-Madison’s Center for Limnology. He and his colleagues collected smelt from three Wisconsin lakes and measured their lengths and gapes — “the largest internal dimension of the mouth.” By establishing how those two measurements are related to each other in enough fish, they could reasonably say smelt of a particular length have a mouth of a particular size.

Next, they developed a similar relationship between the length and body depth of walleye fingerlings. The tool pulls it all together: If the lake’s smelt are this long, here’s how long the walleye need to be before they physically won’t fit inside the smelts’ mouths.

“We can say 95 percent of the smelt are not going to be able to consume these walleyes that we’re going to put in,” Lawson said.

In addition to helping ensure more successful stockings, the tool could also save the state a little money. Raising fish is expensive, and pinpointing the size at which hatchery walleye are ready saves time and labor when possible. Furthermore, the state can ensure that the money they are investing into walleye stocking is actually helping to solve population concerns instead of paying to feed rainbow smelt.